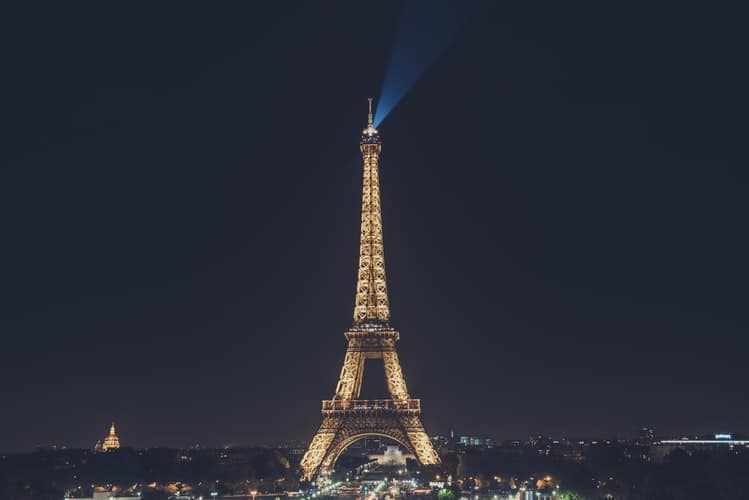 Nothing is more beautiful than the Eiffel Tower at night.

You’re wandering the streets of Paris as the sun tucks behind the horizon. Lovers spread out a blanket and pop open a bottle of cheap red wine. Soon, the grassy knolls become flooded with people eager to make memories underneath the Eiffel Tower at night. While I was in the city of love, romance was the last thing on my mind. I just wanted to get some good travel pics.

As much as I tried to live in the moment, I wanted to memorialize it. After all, it’s Paris! So, I did it. I pulled out my old iPhone 5 and tried to take the best photos that I could. Just a word to the wise, if you’re ever traveling to Paris – or any other part of Europe for that matter, invest in a good travel camera. You’ll be kicking yourself that you didn’t. Anyways, back to the story…

So what I didn’t know in my starstruck state was that I broke the law. While that sounds really dramatic (and is to an extent), it’s actually illegal to take photos of the Eiffel Tower at night. Bbr. I’m just gonna go delete a few Instagram posts. So, you’re probably wondering, what’s the reasoning behind this?

Let’s take a moment and think about it. When you Google “eiffel tower at night,” all those photos that pop up were taken illegally. Every single one. There are countless photos out there floating in the wild on social media too. It has been explained that “Distributing photos of the Eiffel Tower at night is a violation of the artist’s copyright.”

And as crazy as this sounds, it’s actually true. Don’t just take our word for it. Go read the FAQ section of the Société d’Exploitation de la Tour Eiffel (who owns and operates the tower). You’ll find a written statement on their website that says: “The views from the Eiffel Tower are rights-free. Permission and rights must be obtained from the Société d’Exploitation de la Tour Eiffel for the publication of photographs of the illuminated Eiffel Tower.” 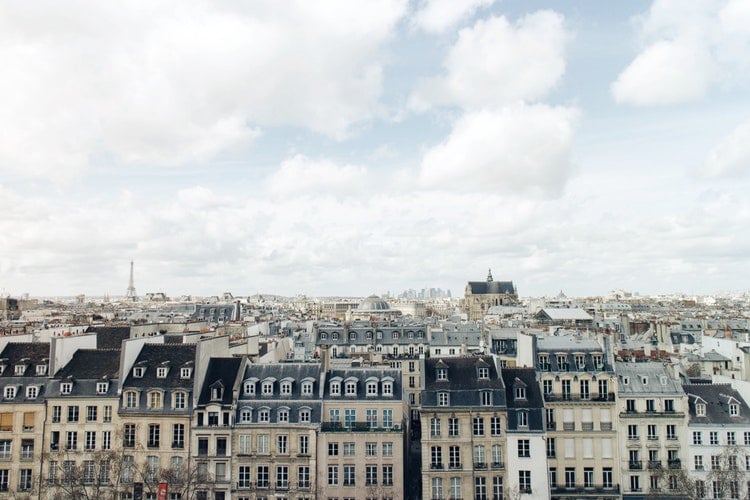 Since the Eiffel Tower is public domain, during the day, it is one hundred percent legal to photograph. However, the building’s light show, which was added in 1985, is technically under the ownership of the artist. The Eiffel tower at night is a spectacular thing to see, as the lights blink and shimmer five minutes every hour on the hour from dusk until 1 am. So technically, if you want to get a photo of the Eiffel Tower at night, you need to get permission from the Société d’Exploitation de la Tour Eiffel beforehand. In fact, even European copyright law says it is illegal to distribute pictures of copyrighted works.

While no one had been brought to court for violating these terms yet, it shouldn’t be ruled out. Posting pictures on social media could count as distributing them. And this is where travelers could get into trouble. The odd part is that the views from the top are completely free; you just can’t take photos of the Eiffel tower at night.

About the Light Show – The Eiffel Tower at Night 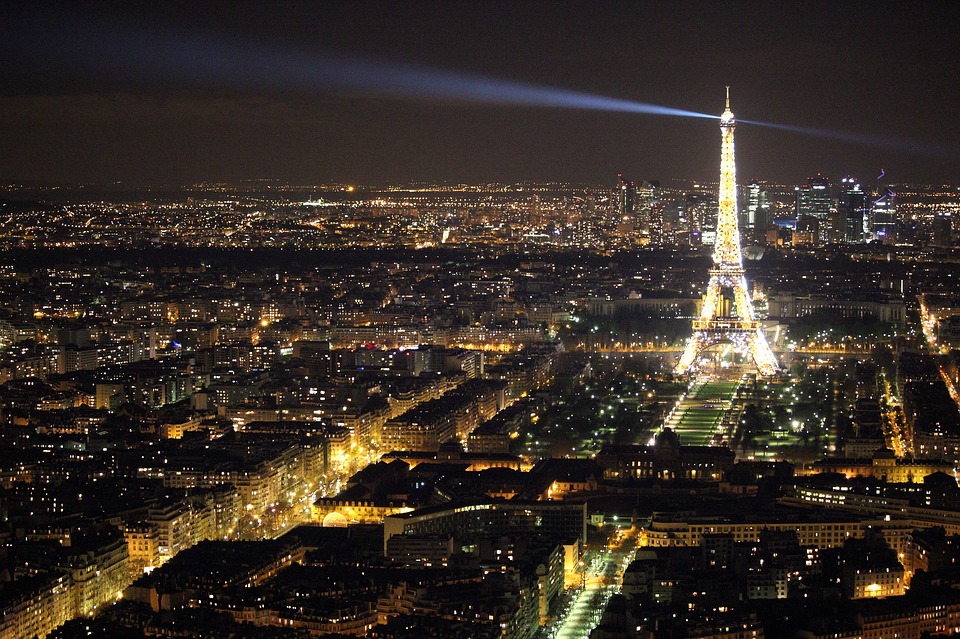 Some seven million people flood the streets of Paris to see the Eiffel Tower every year. It’s no wonder it’s the world’s most popular monument and tourist attraction. While the fee is definitely worth it for the experience and views, there is a more affordable (and arguably more memorable) way to enjoy your experience.

The hourly light show takes place after dusk. As the sun tucks behind the clouds, leaving a fiery glow in the sky, the iron edifice bursts into golden sparkles. If you’re seeking a nocturnal attraction in Paris, you won’t find any better than the Eiffel Tower at night.

When Does the Eiffel Tower at Night Show Start?

Bring your blanket, some snacks, and make memories. Every night from sundown until 1 am, the special show turns the Eiffel Tower into a piercing beacon in the dark. The hypnotic show lasts for a full ten minutes.

It’s well worth staying for the final show of the night. This is when the tower’s glowing orange and yellow lighting system is turned off, giving way to something even more spectacular. The Eiffel Tower night show can be seen for miles and miles around. This beautiful sight draws in travelers from around the world.

Where is the Best Place to Go and Watch the Light Show? 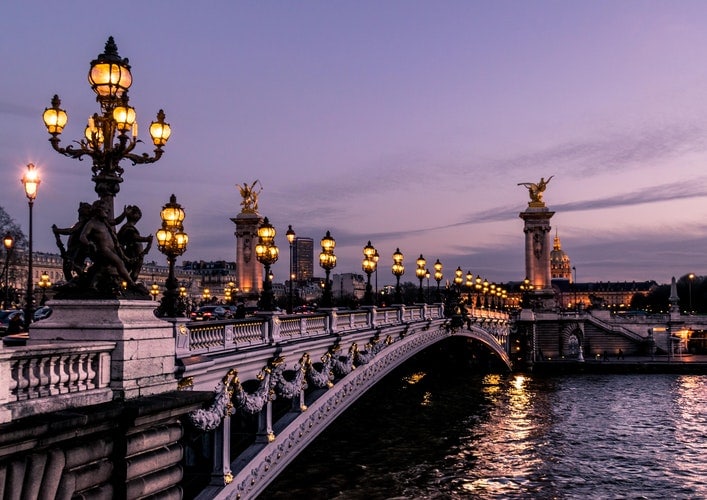 On a clear night, there are so many places you can go to take in the light show. Of course, I’m a little biased since I spent my night at the face of the tower. Other scenic places to view the show are along the Seine in central Paris and also between the Ile de la Cite and the Pont d’Iena. But that is not all. If you’re looking for another good place to perch and set up shop, try the Pont Neuf Bridge. From this perspective, you can fully see the spectrum of the swinging lights, dancing across the silky black sky.

Behind the Magic: How is the Eiffel Tower at Night Lit?

Aha, now we’re getting to the good stuff. The brainchild behind the Eiffel Tower at night is Pierre Bideau, a French engineer who developed the illuminating system in 1985. The system was integrated on December 31st of that same year. Bideau produced warm, vibrant lights by placing sodium lamps onto 336 large projectors. These projectors allow the tower to be lit up from within, radiating outward so far that the Tower can easily be seen from as far as the northeastern corner of the city and Montmartre.

More About the Sparkler Bulbs

The sparkler bulbs first made their big appearance in 1999 to celebrate the mark of the new millennium. Twenty-thousand 6-watt bulbs came together with a combined power of 120,000 watts. On each side of the tower, 5,000 bulbs are put over the general lighting system. The result is a spectacular 360-degree sparkling effect.

Here’s the most fascinating part. In spite of their visual intensity, the sparkler lights do not consume much energy. The city invested in high-efficiency light bulbs in an effort to reduce the carbon footprint. So, eco-conscious travelers need not worry about celebrating a practice that wastes energy.

Are There Ever Fireworks? 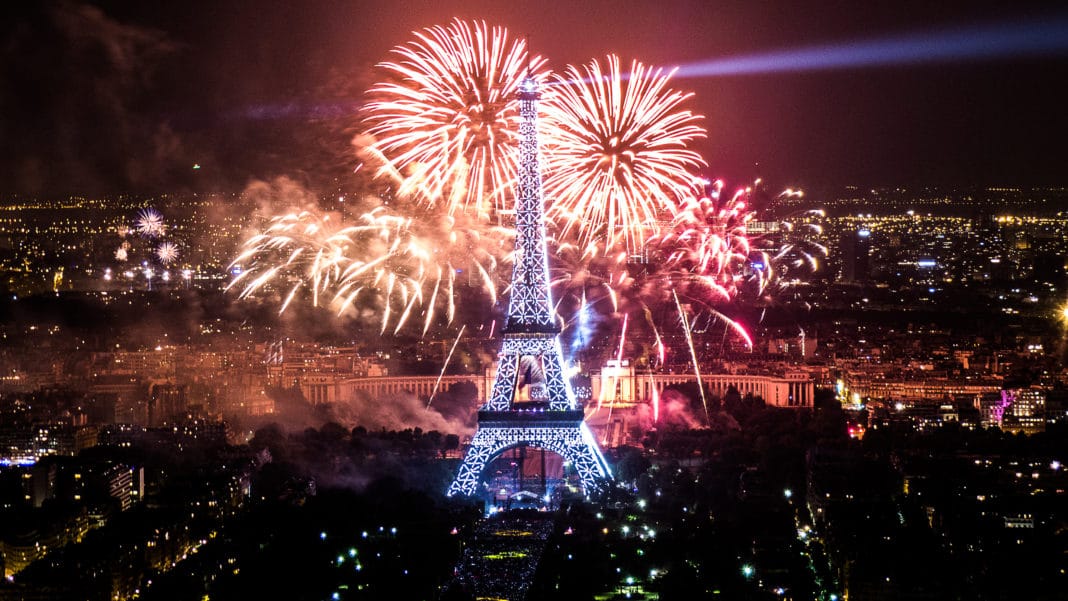 If you visit Paris on Bastille Day (July 14th) and New Year’s Eve, fireworks shows around the Eiffel Tower at night are pretty common. However, security concerns in recent years have given way to more restrictions. Thus, firework displays are less common outside of commemorative events and special holidays.

Special Illuminations of the Eiffel Tower at Night

As the most famous symbol of France’s capital, the Eiffel Tower is a place of pride, memorializing both joyous and sorrowful occasions. In recent years, there have been several special commemorative light installations that made the tower even more of a highlight on the horizon than an average night.

In 2009, it was lit to mark the tower’s 120th anniversary. Light shows were held on display every night for two months between the months of October and December. In November, 2015, the Eiffel Tower was lit in the tricolors of the French flag to pay respect to the 100 victims of the terrorist attacks in Paris. The following month in 2015, the Eiffel Tower was emblazoned with the words “No Plan B” in all caps to mark the occasion of Cop21, a global climate conference.

We hope you enjoyed reading about the Eiffel Tower at night and learning a little bit about its history. As odd as it is, taking night photos of the structure is illegal. I’m sure anyone who visited Paris after 1985 is guilty too.

The structure is a beautiful reminder of the city’s rich history and spirit of resilience. When you go to visit the City of Love, it is so enriching to do so with a heart and mind open to learn. What do you think of the rule that you can’t take photos of the Eiffel Tower at night? Let us know your thoughts in the comment section below.

Are you looking to learn more fun facts about Europe and places to see? Make sure to check out these articles for more information.

Do you have any questions or comments for us? If so, feel free to leave us a message below. We will be sure to get back with you soon.

Related Article: 7 Famous Statues to Seek Out on Your Next Adventure