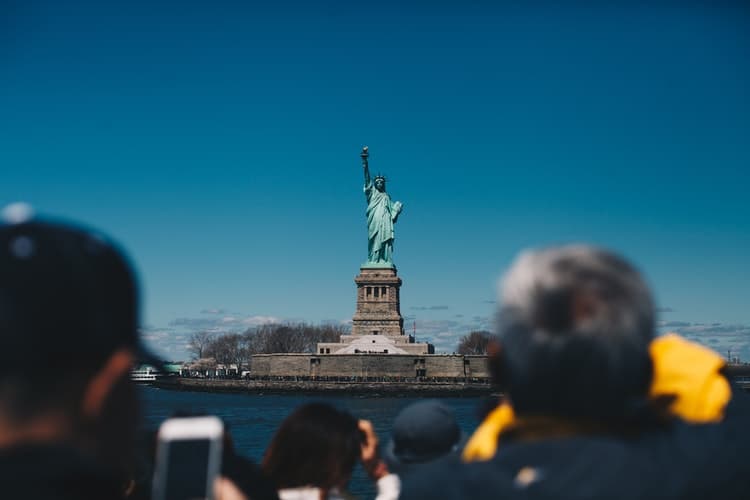 There’s nothing quite like standing before something massive and realizing just how small you are.

That might mean making a trip to see the largest famous statues in the world or staring up the at stars on a clear night. If the first suggestion sounds more your style, then get ready for our list of the best famous statues to weave into your next adventure. Whether its a relatively modern statue or made thousands of years ago, these famous statues were all erected for one reason or another. Was it a call to freedom or to make you think deeply about something? It may have been built simply to make you stand in awe of a great work of art. For some, exactly why and how they were made will always baffle us. But, no matter which famous statues you end up at, they will each rock your world in their own way. So, let’s jump into the most famous statues all around the world. 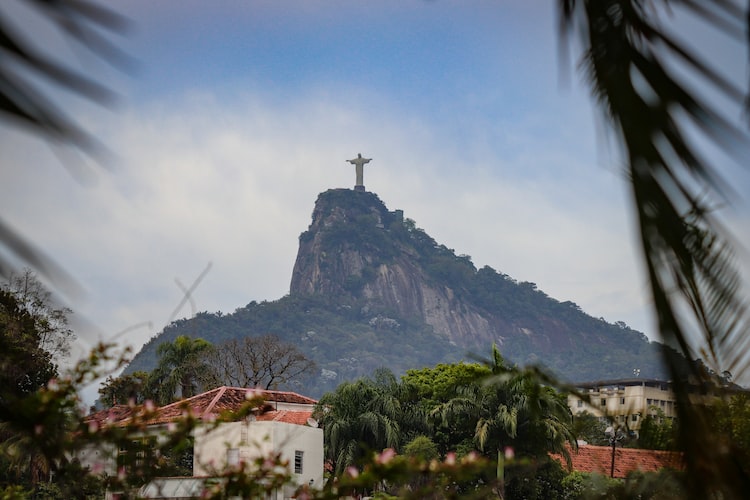 Built in the 1920s, the Christ the Redeemer statue is an icon of Brazilian culture. Posted high on the peak of Corcovado mountain in Tijuca Forest National Park, this most famous of statues overlooks Rio de Janeiro. A major Catholic movement first fostered the idea for this statue, and developers finally agreed on the design of Jesus Christ with open arms as the approved statue design. This position portrays peace to the world. Brazilian engineer Heitor da Silva Costa and French engineer Albert Caquot made the design design. Then, French sculptor Paul Landowski and Romanian sculptor Gheorghe Leonida made these plans tangible. The latter specifically focused his work on the face.

Jesus himself is 98 feet tall and on a 26-foot pedestal. His arms stretch ninety-two feet wide. Made of reinforced concrete and sandstone, this statue has done well to withstand the test of time. It has recently gone under some maintenance and restoration. So, if you’re wanting to see some famous statues, now is a spectacular time to visit Brazil and see this religious icon. 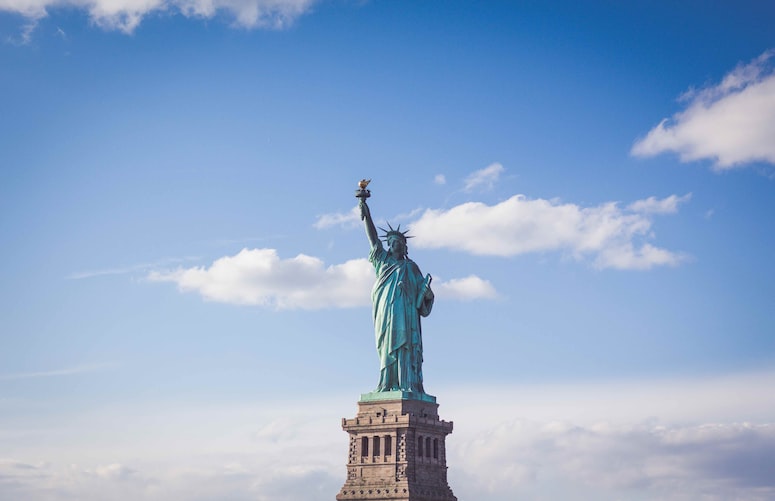 Talk about a good gift. The Statue of Liberty in New York, New York was given from France to the United States and dedicated on October 28, 1886. Officially named Liberty Enlightening the World, she stands as Libertas, the Roman Goddess of Liberty. Gifted to be a symbol of the friendship that France and the US have, Lady Liberty is truly one of the most famous statues. Holding her torch high, she lit the way for immigrants coming through to Liberty Island and then America. The poem inscribed along the base of her pedestal is The New Colossus by Emma Lazarus. At one point, she states, “Give me your tired, your poor, your huddled masses yearning to breathe free”. This statue is proclaiming what America was built to be: the land of the free and the home of the brave.

If you can’t seem to make it to New York to see this brilliant site, then maybe Buffalo, New York would be easier? There is a replica in downtown Buffalo, making two of these famous statues in the world. So, go seek out this spectacular piece of American history and see some of the Big Apple while you’re at it.

The Terrifying One or quite literally, the Father of Dread sounds like something you’d want to visit, right? Well, it’s more well known as the Great Sphinx of Giza. Perhaps you’ve seen pictures of the limestone creature. Having the body of a lion and the head of Pharaoh, this is one of the most incredible famous statues. Perfectly situation facing West to East, the Sphinx is located on the West Bank in Giza, Egypt.

This famous statue has withstood the test of time. It is believed to have been built over 4,500 years ago. It stands or lays, 240 feet long and 66 feet high. The bedrock of the plateau makes us most of the Great Sphinx. But, the origins of this statue are still lost on us today. Why exactly was it built? And how in such ancient times? These are all things we would love to know. While I doubt you’ll be able to find out these answers on your visit, it would be well worth your time to stand in awe of this stunning ancient marvel. 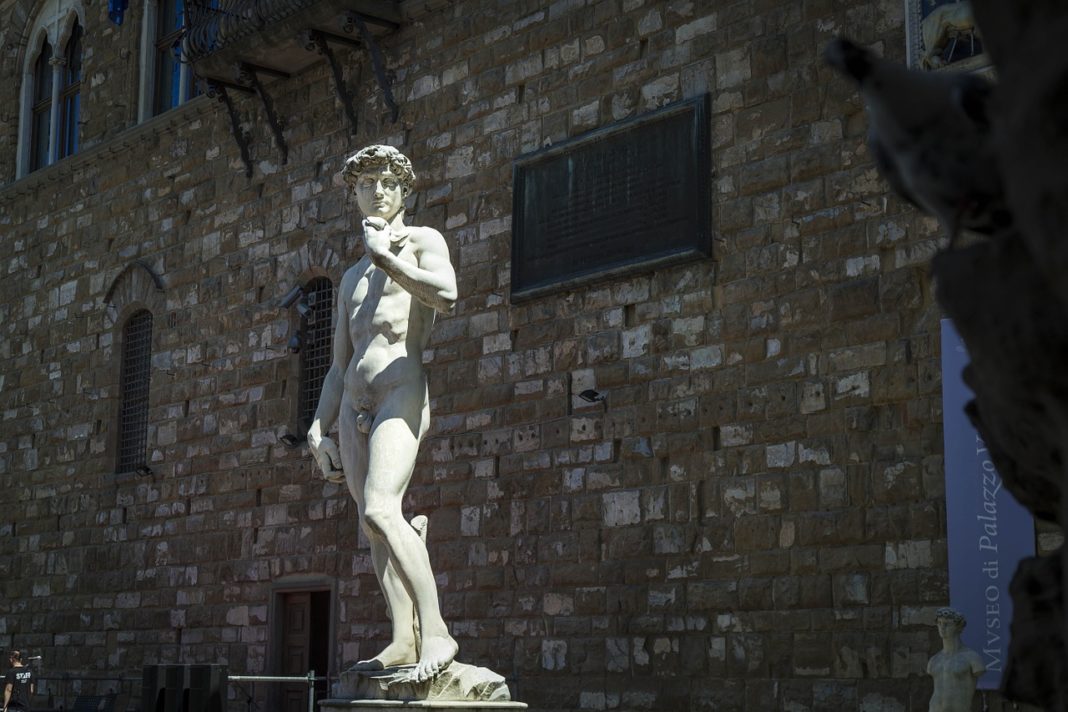 David did a great many things in his life, including slaying a giant and being a man after God’s own heart. Those two incredible feats of this ancient man are just parts of why Michelangelo constructed this stunning statue of David in the nude. Florence was a small independent city-state at the time of carving. So, the statue of David was commissioned to rally the unity of the city against the major powers, or giants, encroaching in from all sides. If you go to see this famous statue, you’ll notice that David has quite the glare on his face. This glare faces Rome and gives warning for them to stay far away.

David by Michelangelo has is the most replicated on our list of famous statues. There are copies in many major cities and even paintings done of the quintessential Renaissance art. Made out of marble in from 1501-1504, he is truly a masterpiece. David stands seventeen feet tall, but if you look closely you may notice some intriguing proportions. He tends to be a little thin as far as depth goes, and he has enlarged hands in comparison to the rest of his body. He was originally going to be set atop a cathedral, which may be the reason why his details needed to be larger.  Whatever the reason, this is perhaps the most intricate on our famous statues list.

5. The Motherland Calls in Volgograd, Russia 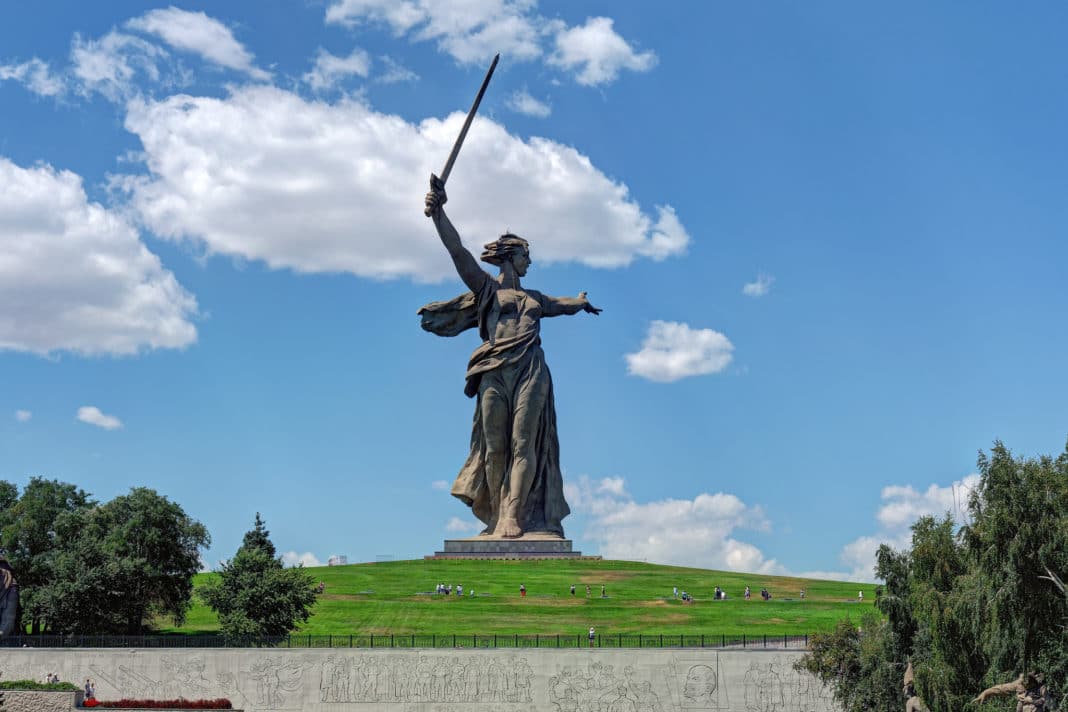 Mother Russia is perhaps the most fascinating engineering feat on our list of famous statues. Standing 279 feet tall, she thrusts a sword high into the sky. This pose and woman send a message too all who see her: the Motherland calls all her sons and daughters to fight hard and fight well. Specfically, the heroes in the Battle of Stalingrad are honored through her. In order to build this statue, each piece is actually hollow in order to keep the weight balanced. The dedication of The Motherland Calls statue took place in Volgograd in 1967.

Sculptor Yevgeny Vuchetich and engineer Nikolai Nikitin built her from the beginning. These two, combined with many people after construction, have kept The Motherland Calls standing for a long time. With recent changes and restoration, she will hopefully continue to stand for a long time. That being said, she has moved 20 centimeters from when she was placed. So, I’d still hurry on over to see this stunning and famous statue before the wind blows too much. 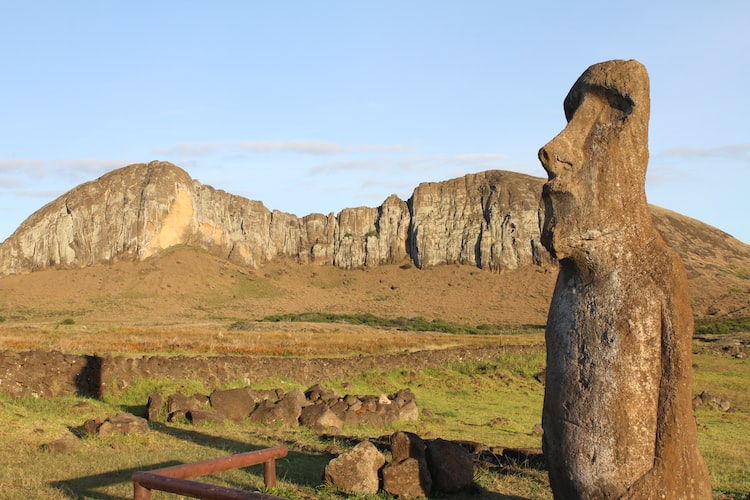 The Moai of Easter Island may be the most puzzling icon on our list of famous statues. Located on Easter Island in eastern Polynesia, they stand along the edges of the island looking in. These statues have unique proportions, with over three-eighths of each statue being the head. There are over nine hundred of these statues, the largest of which weighs 90.4 tons. How these statues made it from the rock quarry Rano Raraku around the island is an incredible mystery. Additionally, the tallest statue is 33 feet high. While they have slowly fallen apart over time, they have been slightly restored and put back together over the years. Archeologists have found that they once held coral eyes with black obsidian or red scoria pupils. So, if you ever make it to these famous statues, imagine those eyes just staring right back at you. We just think this next piece of artwork on our list of famous statues is hilarious. The wee little Manneken Pis is a small boy who is urinating, forming a fountain of water in front of him. The original is located in the Museum of Brussels, but copies have been posted over the years in the town square. This little peeing man symbolizes much of the humor and culture of the city of Brussels. The fun, mischievous dynamic that little boys often have reflects the fun spirit and jolliness of the city itself. So, if you want an excuse to visit a phenomenal city and see a humorous famous statue while you’re at it, head on over to Brussels.

Art has always been a unique picture into the soul of people, and these famous statues are stunning pieces of art.

It only makes sense that the famous statues all around the world tell stories of the people who surround them. Whether it’s a religious statement or a humorous one, you can truly gain a new appreciation for the culture of a land through their statues. Even if we don’t know everything about them, like the heads of Easter Island, we can still marvel at their beauty and finesse. So, if you’ve already seen the best things to see in every state, broaden your horizons! We hope you’ll use our list of seven famous statues to jumpstart your next adventure!