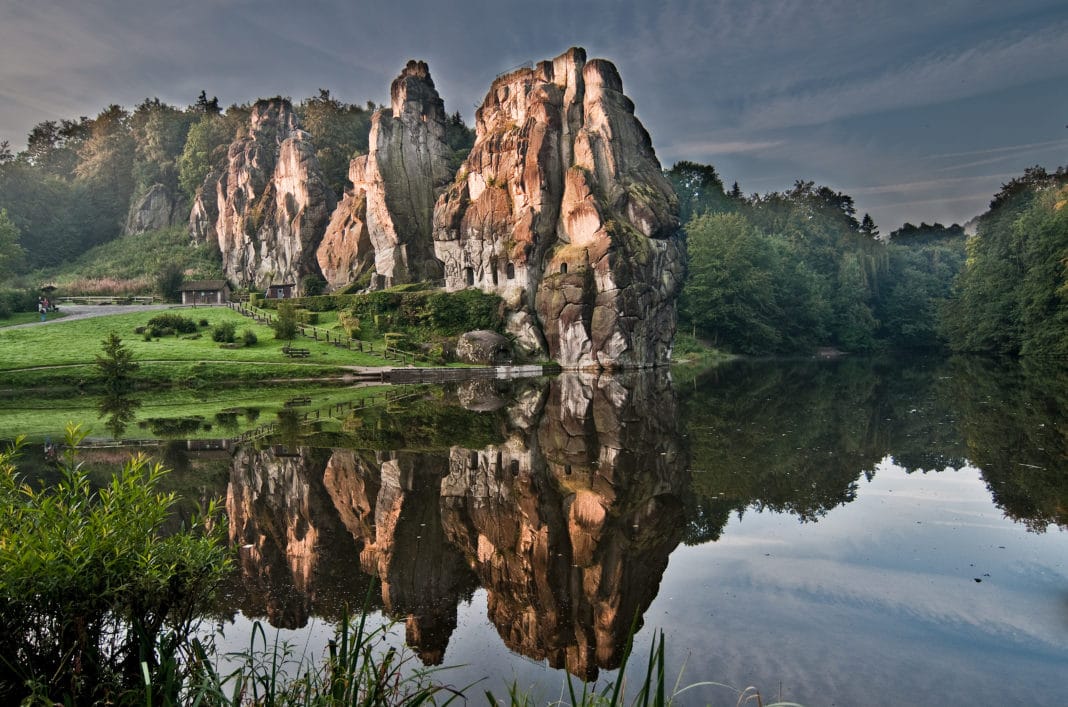 Rock formations have baffled onlookers for thousands of years, leaving us only to wish we could have seen their whole formation.

Nature is truly something that we will never be able to fully understand, but I hope we can all highly appreciate. Through the geological shifts and time-worn battles, rock formations have formed all over the globe that leave you in awe. From perfectly geometric pillars to monoliths that seem to have just fallen from the sky, each one has its own unique qualities. In addition, some of them are slowly wearing away too, giving you a glimpse of just how little we all seem in the grand scheme of things. So, get ready for some unbelievable rock formations that will blow your mind. On the outskirts of Wanli, New Taipei, Taiwan, you will find some of the more humorous rock formations. Almost appearing as gray brains held up from the yellow sand below, these natural rock formations are quite quirky. Formed by a mountain being pushed out of the surrounding sea, quite a few diverse shapes have formed. Just like staring at clouds on a summer’s day, you might notice each of these formations looking like something, or someone, different. If you venture here, you will see the famous Queens Head that looks like Queen Nefertiti. A fairy, camel, mushroom, and candles are other shapes that have been sprinkled about. So, head to Yehliu Geopark and see what you think all these funky rock formations really look like!

2. The Arbol de Piedra in Bolivia Also known as the Stone Tree, the Arbol de Piedra may not be much longer for the world. Having been worn away slowly by the sand in the wind, the trunk is slowly shrinking. Amazingly, it still stands twenty-three feet high and almost as wide. Being quite remote in the Eduardo Avaroa Andean Fauna National Reserve of southwest Bolivia, this rock formation will be quite the trek if you want to see it.

You’ve probably seen pictures of someone making an insanely cool rainbow layered cake somewhere on the internet, or at least a rainbow donut. If the chef or baker claims they first got their inspiration from nature, well, we can tell you exactly where. The Danxia Landform in China is one of the largest rock formations on our list. They’re mountains. The full name of this natural phenomenon is the Zhangye Danxia Landform Geological Park. The compression of different minerals and sandstone has formed these rock formations very slowly over time. This multi-layered landscape is truly one of the most awe-inspiring and beautiful rock formations on our list. So, if you’re ready to be blown away, head on over to China.

You will probably never make it out to these strangely placed rock formations. Because of this, we want to make sure they made it on this list so that you at least got to see a picture. The Man Pupu Nyor is also known as the “little mountain of the gods”. These seven tall and skinny rock pillars are seemingly plopped down on an incredibly flat plateau for no reason at all. But, they are not small. The tallest stands around 137 feet tall with the others being close behind. In order to make it to this plateau in the western part of the Ural mountains, you will need to take a helicopter or snowmobile. So, very few will actually venture this far out. But if you do, see if these giants truly do make you feel small.

5. The Stone Forest in China

If you are one who usually heads for the woods, this rock formation might be more up your alley. The Stone Forest, known as Shilin in Chinese, is a stunning set of karst formations outside of the provincial capital Kunming in southwest China. The rocks seem to spring up from the earth, much like stalagmites in a cave would. Thought to have been created when this part of the earth was fully underwater, you can almost imagine this being an ocean trench. One particularly famous pillar here is Ashima peak. Amazingly, it is thought to be an incarnation of a little girl named Ashima and respected greatly by locals. So, as you walk through these towering rock formations, you could really imagine yourself in a petrified forest turned to stone. But, lucky for you, you won’t turn to stone if you visit this beautiful marvel.

Appearing more like amphitheaters chucked fill of pillars, Bryce Canyon doesn’t really seem like a canyon. These hoodoos are pillars that spring up from the floor. Amazingly, they can be over two hundred feet tall. Bryce Canyon is the largest collection of these hoodoos in the world and has to be seen in person to truly fathom. Caused by wind and water erosion on the limestone, this place is still adapting and changing today. Being a national park, this is a great camping, hiking, and exploring destination for the whole family. This being said, it is definitely one of the more expansive rock formations on our list.

One of the favorite things to do in Thailand is visiting Ao Phang Nga National Park and see Khao Ta Pu rock. The James Bond movie, “The Man with the Golden Gun” made this rock formation famous in 1974 by shooting a famous scene on the nearby beach. The limestone protrusion from the water is skinny on bottom and increases in diameter as it reaches towards the sky. Covered with some trees but mostly different shapes and angles of its limestone, it is truly fun to visit. Know ahead of time that the boat traffic is limited around the base of the island rock formation to protect it and keep you safe. So, if you’re a Bond fanatic or just like really good beaches, this is a great option to visit on our list of incredible rock formations. Some of the most astounding rock formations are the ones that look like they could only be built by man. But isn’t that assuming a lot of us, rather than what the natural world is capable of? I’ll let you ponder that on your way to the Giant’s Causeway in Northern Ireland. Made up of around 40,000 basalt columns, this oceanside rock formation is quite a sight to behold. Having been formed from quickly cooling lava, each basalt column is almost perfectly hexagonal. The tallest columns reach close to forty feet high. However, many of them have eroded over time. This has left what seems like perfectly laid hexagonal stones that are supremely fun to play on as you hop around Giant’s Causeway. So, if you’re next vacation is somewhere in Ireland, we would highly recommend checking out this most geometric of our rock formations.

9. The Wave Rock in Arizona

Near the Coyote Buttes of the Utah-Arizona border is a beautiful rock formation called Wave Rock. Having stripes of yellow, orange, white, and tan undulating across its surface, it is truly stunning. Made of Navajo Sandstone, this is the most protected of the rock formations on our list. Only twenty people per day are permitted to come in to see this. So, if you’re lucky enough to be one of the twenty, don’t forget your camera. Visiting these rock formations is truly a once in a lifetime experience.

This is the most sacred of our rock formations. Externsteine is a set of five massive rock columns that tower up from the earth in northern Germany. The rock formations align perfectly with the stars, making it a gathering point for many spiritual people. To this day, there is a chapel on top of one of the rocks that is accessible by an attached footbridge. Getting up there is still not for the faint of heart. You will be crisscrossing and weaving your way up small tunnels and walkways edged precariously in the sides of the limestone pillars to get there. But, if you’re searching for a place to get a little closer to the stars, Externsteine in Germany might be the rock formation for you.

With beautiful and breathtaking rock formations all over the glove, you can’t help but wonder what is hiding in your own backyard.​

Since the beginning of the world, the ground, water, and wind have been shifting and changing our landscape. This might look like a volcano erupting and forming what looks like it was built by man. It may be an incredibly tall stone tower coming up out of a plateau for seemingly no reason. Perhaps there is a river weaving its way through making a new rock formation right now. Whatever way nature decides to go, we can be assured that it will often create something beautiful in the end. So, keep your eyes open for other dazzling rock formations. With the expanse of nature, all of the beauty that has been created so far simply can’t even begin to be understood simply by words and a few pictures. Instead, go find these sites.