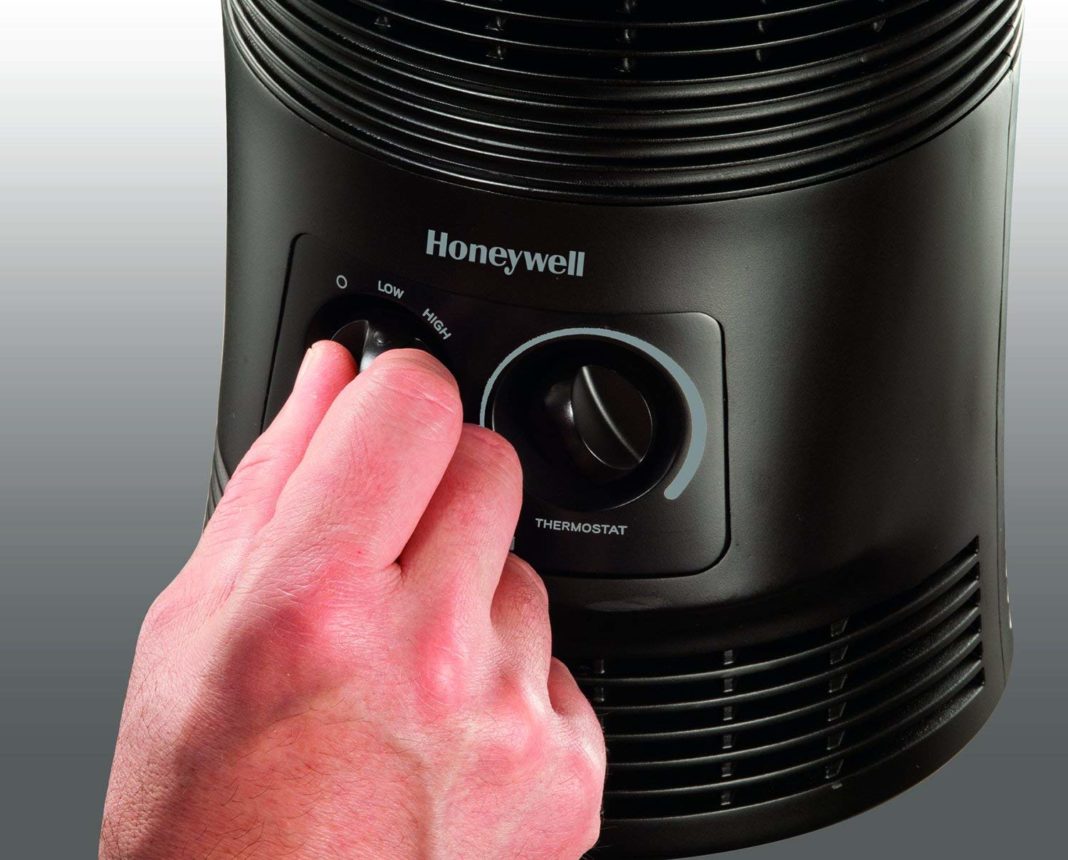 Not sleeping well because of cold temperatures in your tent is simply not worth it.

Tent heaters are a quick, simple, and effective way to get a good nights sleep even when you’re out in late October or November. There has been quite a bit of progress in safety, efficiency, and value of tent heaters in recent years. So, we can’t help but get excited to bring one along on our next fall camping trip. Specifically, the Honeywell 360 Surround Heater is a budget-friendly heater that doesn’t lack in heat output, ease of use, or safety. With a well-known brand like Honeywell behind this product, too, you can be assured you can use it season after season to keep warm and cozy wherever you are. So, if you’re ready to extend your camping season past summer, read on about the Honeywell 360 Surround Heater.

A Little About Honeywell

Honeywell is a Fortune 100 Company that has been providing top-notch products in a variety of fields. From aerospace engineering to home improvement. The beginnings of Honeywell can be seen back in 1906 when a Mark Honeywell started the Honeywell Heating Specialty Company. Yes, they have been perfecting their heating game for over one hundred years. So, what started as a mercury seal generator business has turned into one of the world’s largest heating and cooling companies in the world. So, you can be assured that Honeywell has had time to perfect their portable heaters over the years.

Some of us sleep warm, and some of us sleep cold. While some of that can be made up through different layering combinations, warm socks, and great sleeping bags, some of it can’t. So, if you’re looking into an adjustable tent heater, the Honeywell 360 Surround Heater is a great option. It has an adjustable thermostat and two heat settings. While the thermostat does not have guestimated temperature output reading, it does go from warm to very hot. In addition, you can have the fan blowing out on low or high. So, depending on how quickly you need to warm things up, you can adjust this heater to your needs. These controls are both located simply on the front of the heater for quick access. There is also a light on the front to let you know when it’s on.

We just mentioned how we love how lightweight this heater is. So much so that even the small ones in the family can move it around. But, don’t be alarmed about this potentially lighting something on fire. The Honeywell 360 Surround Heater is equipped with a 360-degree tip over switch and overheat protection. This means that if the heater tips in any direction whatsoever, it will automatically shut off. In addition, if you forget to turn the heater off and leave your tent and it begins to overheat, it will switch itself off. Both of these features mean you can rest assured that you and your family will be safe even while you sleep. Even with all of this, Honeywell has given its Honeywell 360 Surround Heater a sturdy base to keep any safety or tipping concerns at bay in the first place.

When you’re taking a tent heater to the woods, you want something small and portable. Camping is not the time to be lugging around a fifteen-pound heater just to keep your toes warm. Thankfully, the Honeywell 360 Surround Heater is just three pounds and comes with a carry handle. The carrying handle is cool to the touch, so you can move it even when it’s been on high gear for quite some time. It is light enough the little ones can maneuver it around as well, which we love. If you do happen to drop the Honeywell 360 Surround Heater, though, don’t be alarmed, It comes with a three-year manufacturers warranty. This will keep this little heater going for years to come.

You know that feeling on a cold evening when someone steps in front of you at the campfire, blocking your heat. Immediately you side step to get back in the heat wave. This little warmth dance is not something you should have to do when you’re in your own tent trying to keep warm. This is something that the Honeywell 360 Surround Heater has evaded. Rather than a one-direction output, it streams out heat in all directions. So, set this heater up in the middle of the tent to let the heat radiate out to everyone. The fan has two settings to push the heat out depending on your needs.

Keep in mind, though, that it might be a little tricky putting this heater in the middle of your tent. It needs to be plugged into an electric outlet to use its 1500 watt output. So, this heater is best used if you have a generator or electric hookup at your campsite. This being said, it transfers great from being a tent heater to helping out in the basement when you make it back home to keep everything warm and toasty. So, consider the Honeywell 360 Surround Heater if you’re looking for something you can use both in the woods and at home.

What Travelers Are Saying About the Honeywell 360 Surround Heater

For around thirty dollars, users of the Honeywell 360 Surround Heater agree that you get a great bargain in this little heater. It has a solid heat output and will take the chill out of just about any space. That being said, the more room you’re trying to heat up, the less effective this will be. For most car camping tents, this shouldn’t be an issue. However, if you try and heat an entire basement with this when you’re not out in the woods, you may get a little disappointed. Other campers and travelers who use the Honeywell 360 Surround Heater really like how well the safety features have been incorporated into this. From the automatic shut off when it gets tipped over to the overheating sensors, parents especially appreciate that they won’t have to worry when running this heater.

The Texsport Propane Heater is a great alternative to the Honeywell 360 Surround Heater if you want no wires attached. It connects to your typical camping propane bottle, making it perfect for fall camping or other cool weather activities. It can push out up to 2,890 BTU’s and be taken just about anywhere. The propane heats by a flame, which may cause concern. But, it’s been equipped with a shut-off valve if the flame does go out.

In addition, it comes with a large base to attach to the tank and a safety grid. Please note the propane canister itself is not included. It is made with durable stainless steel, so it can take just about whatever adventures you throw at it. The simple and easy control knob lets you adjust the heat flow as well. A carry handle, as well as an aluminum reflector, is also included. This can keep you warm for between 4-6 hours on one pound of fuel.

This next option by Mr. Heater is quite a solid one. It is also wireless as it is a portable propane heater. The Mr. Heater Little Buddy Heater can heat rooms and tents up to 95 square feet. You can use it as high up as 7000 feet, so it’s great for any alpine camping you’re thinking of doing. It will provide you and your tent with odor-free heat for up to 5 ½ hours on a one-pound propane cylinder. A simple on/off switch is your only temperature regulator.

There is an automatic shut off switch if it gets tipped over. In addition, there is a low-oxygen sensor which will shut it off if you’re using it in a small, enclosed space for too long. It has a fold-down handle for easy carrying as well as a wide base for stability. Overall, the Mr. Heater Little Buddy is a great wireless propane heater alternative, although you will pay a few extra dollars for it.

The Lasko 754200 Ceramic Heater with Adjustable Thermostat is the closest alternative we have to the Honeywell 360 Surround Heater. It has three settings for you to choose from, a 1500-watt high setting, a 900-watt low setting, and a fan-only option. These are controlled manually, although this heater does have a self-regulating ceramic element. This Lasko heater is also praised for its quiet operation. This is a huge plus if you’re getting out into nature to escape the noise of the city anyway. It has automatic overheat protection as well as a convenient carrying handle. It is very small, making it nice and portable measuring 5.75 by 7 by 9.2 inches. In addition, it also has a three-year limited warranty. So, for an alternative with a little more adjustment at the same price, keep this in mind.

All in all, the Honeywell 360 Surround Heater is a decent tent heater, although it does require an electrical hookup.

If you’re looking for a budget-friendly tent heater from a reliable company that is quite versatile, this is it. It can easily go from your car camping excursion to your basement heater in no time. It won’t run out of gas because of its electrical source, which we love. Lastly, it has multiple safety features, surpassing many others of its kind on the market. So, if you have a way to plug it in, then, by all means, the Honeywell 360 Surround Heater is a spectacular option for your next fall camping trip.

Related Article: The 6 Best Tent Heaters for Your Next Fall Camping Trip 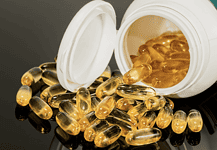 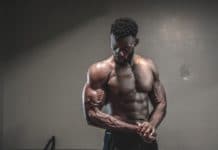 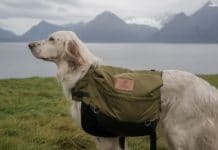