The Martian is the 2015 movie that goes all the way to the red rocks of Mars. The film stars Matt Damon who plays Mark Watney, an astronaut left stranded on Mars after his team mistakenly thought he was dead. The movie shows Watney’s struggle to survive on this land as rescue missions are undertaken to bring him home safely. Being that most of the movie takes place on this far away planet of Mars, the production team set out to find the most realistic place to film the movie. What place could look like the real thing? What place had red rocks and a realistic Mars-type vibe? Where was The Martian filmed? (Are you hanging on to the edge of your seat?)

Where Was The Martian Filmed?

The Martian was filmed in none other than Wadi Rum, which is located in southern Jordan. This vast desert served as the setting for The Martian movie, and wow is it a stunning destination for so many reasons (stay tuned for all the reasons why you must visit Wadi Rum). Wadi Rum is also konwn as the Valley of the Moon, and for good reason. The desert showcases a lunar-like landscape, that looks and feels like you’ve left planet earth and are floating where gravity doesn’t exist (good news: gravity exists in Wadi Rum).

This backdrop was not only used in filming The Martian, but other Hollywood movies were filmed in this exact desert as well. To name a few, Red Planet and Transformers: Revenge of the Fallen also have scenes from this popular Jordanian desert. The terrain is unlike any other place in the world, making it an ideal location to shoot films that are set in other worlds or on other planets. This immense, protected desert land stretches on for miles and miles, making it a mystical place to film a movie or vacation off the beaten path. The days in this Middle Eastern desert are dusty and the nights are starry skied. There are rolling red sand dunes and jagged mountain ranges to behold at Wadi Rum. As the sun moves throughout the day, the colors of the rock change in response. The destination is marvelous in so many ways.

Whether you want to visit Wadi Rum to see the place where The Martian and other Hollywood blockbuster hits were filmed, or you just want to experience all the amazement and fun-filled activities Wadi Rum has to offer travelers, you are sure to have an amazing, genuine desert experience in Wadi Rum.

Visiting one of the Bedouin camps, travelers will feel less like ordinary tourists, and more like welcomed family. Bedouin hospitality will provide you with ample amounts of traditional Bedouin tea, sincere conversation, and a culturally rich experience in the desert of Jordan. The scenery will cause any photographer to gawk at the photo possibilities. The sunset will cause your breath to be taken away and your heart to melt. The night sky will display a vast amount of twinkling stars, just for your eye’s delight.

Visit Mars: Things to do in Wadi Rum 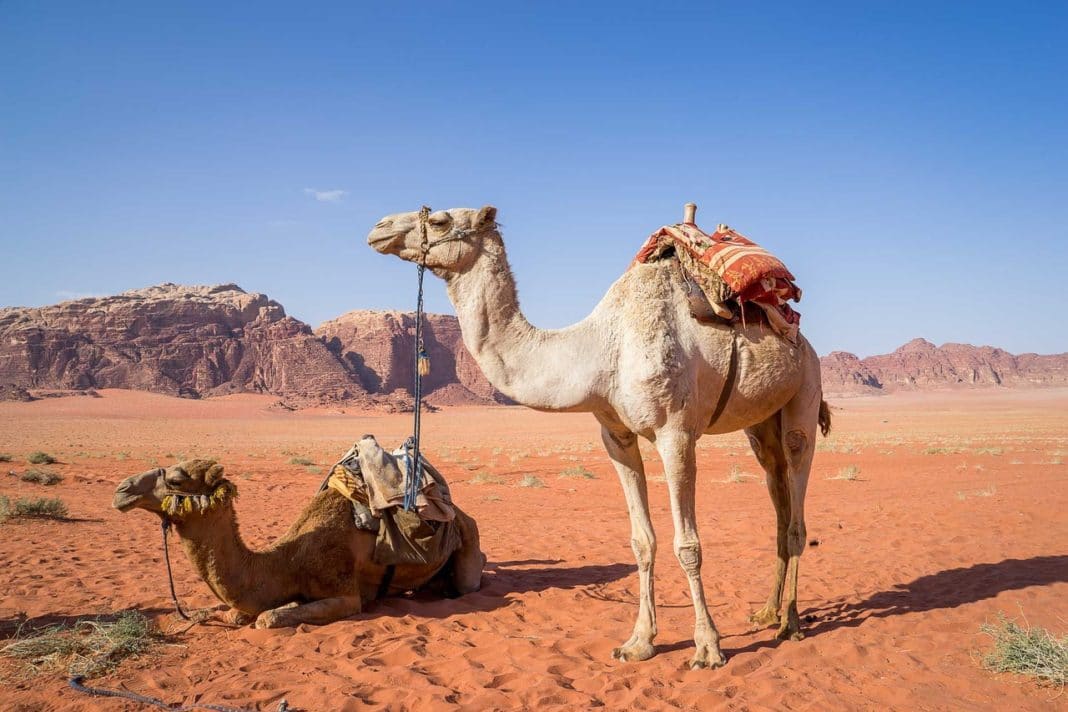 Wadi Rum serves as a majestic location for not only the production of The Martian, but also for travelers wanting to experience the wonder of this red-hued desert landscape. There are plenty of things to do and activities waiting for you at Wadi Rum. Because of this, the desert has become a travel destination for those wanted to explore new places off the beaten path. Bedouin camps call Wadi Rum home and there are many tours available for visitors to come and learn about local Bedouin traditions, admire the rock formations, drink a glass of tea, and explore the history of Wadi Rum. Because of the many mountains and the wide-open spaces, the deserts allows for hiking upon hiking. Also, tours of the area via jeep or camels are popular things to do when traveling to Wadi Rum. Bring you camera, bring your walking shoes, and bring your… climbing shoes?

Yes, rock climbers, you will find the sandstone mountains and cliffs of Wadi Rum to be a climbing paradise. The Bedouin have climbed these mountains for generations and you’ll find the views from the top of the red peaks to be breathtaking. If you want to journey even higher than the mountain peaks, then you can take hot air balloon rides high into the sky to survey this great Mars-like land. Float up in a rainbow-colored balloon to see the endless desert area from a unique vantage point.

Visit Mars: For an Out-Of-This-World Experience

Wadi Rum truly is other worldly. Visiting Wadi Rum will feel as though you stepped onto another planet. Perhaps, Mars. This red sand terrain is a favorite for travelers near and far and really is a must-see in the world. The Martian thought it realistic enough to film the majority of the movie in Wadi Rum, so we think you too will find it to be the perfect destination for you. Particularly, those adventurous folks who like venturing outside of well-known cities and popular tourist destinations.

There is no wonder quite like Wadi Rum. The desert is overall impressive. The stargazing is even more so. For people wishing to travel to Mars, but want something far less “out there,” we recommend coming to Wadi Rum. This Jordanian desert will satisfy that desire. Nothing can prepare you for the marvel that is waiting for you at Wadi Rum. But, we can tell you, it will be worth the visit.

Have you traveled to this lunar landscaped desert? Tell us about your experience in the comments below!

Did the answer to “where was The Martian filmed” surprise you? Let us know in the comments too!