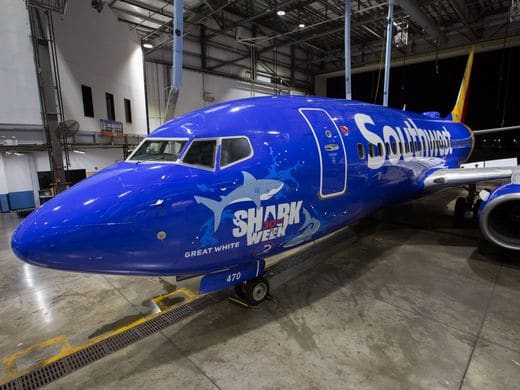 It turns out that there are many ways to celebrate Shark Week this year.

Shark Week is coming and it is time to get ready. This annual occasion is certainly an anticipated television phenomenon. From Jaws to the Discovery Channel, people have always been fascinated with these massive fish. The edge of your seat thrills and the curiosity of the undersea world both contribute to Shark Week’s popularity.

For the extreme shark fanatics, there are different websites where you can actually track sharks and their travel patterns. OCEARCH is a popular way to actually track Great White Sharks in real time. But how about tracking something a bit bigger than a shark? What about something 174,000 pounds bigger? It turns out your shark tracking hobby might actually come in handy during this Shark Week.

Southwest Airlines is bringing back their fishy flights – and it is better than ever.

For the third consecutive year, Southwest Airlines is celebrating Shark Week by launching special planes. These Boeing 737 have a little undersea flair with Shark Week themed designs on them. In previous years, only one aircraft received a makeover, so this year is extra special with five total planes.

Southwest Airlines is highlighting multiple shark species with their aircraft roll out. Each of the five Boeing 737’s will feature its own type of shark. These exciting planes are launching this Monday and will fly through August 31.

If you get into it, you can even make a Shark Week social media post using the hashtag #SharksTakeFlight. Don’t forget to tag Southwest Airlines at @SouthwestAir.