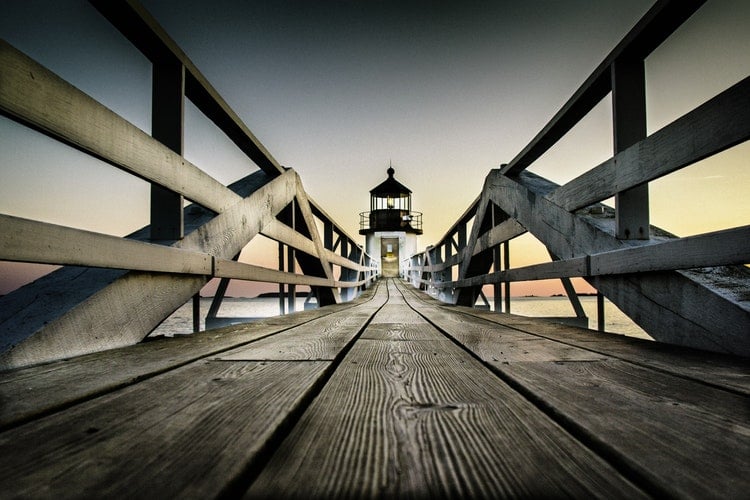 Here, you will find 65 historic Maine lighthouses standing in the sand, a beacon of light in the dark. This is what the state is known for – its old world charm set along 5,000 miles of sand, islands, and inlets. While many of them are not accessible on land, you can still take a ferry and get some amazing photos. This is some Wes Anderson kind of stuff. Prepare yourself, get your stoke level high, and bring a good camera for the memories. 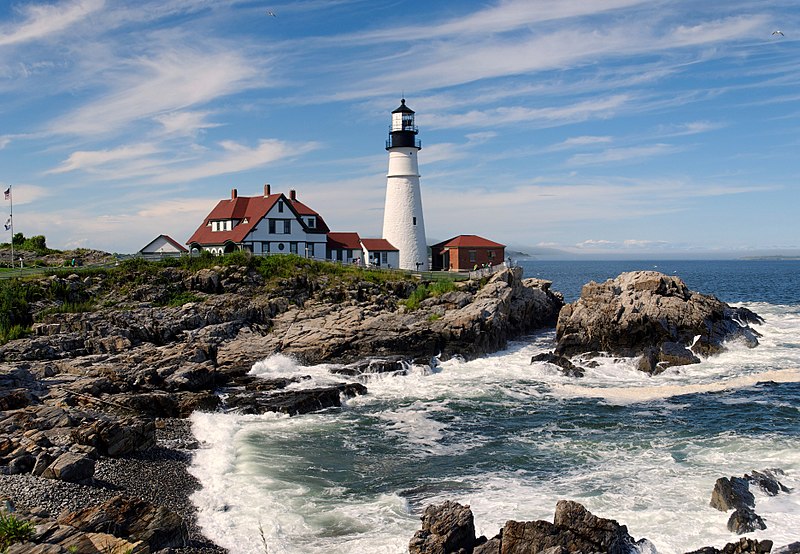 Built in 1791, this lighthouse is the main entrance to the shipping channel leading into the Portland Harbor in the Gulf. You’ll find it right in Cape Elizabeth, the oldest sitting lighthouse in Maine. In times past, whale lamps used to provide illumination. In 1855, these were replaced by a Fourth Order Fresnel Lens in 1855. Today, the light station is still functioning and automated. The maintenance of the beacon and the foghorn is done by the U.S. Coast Guard. As part of the Fort Williams Park, it is a maritime museum. 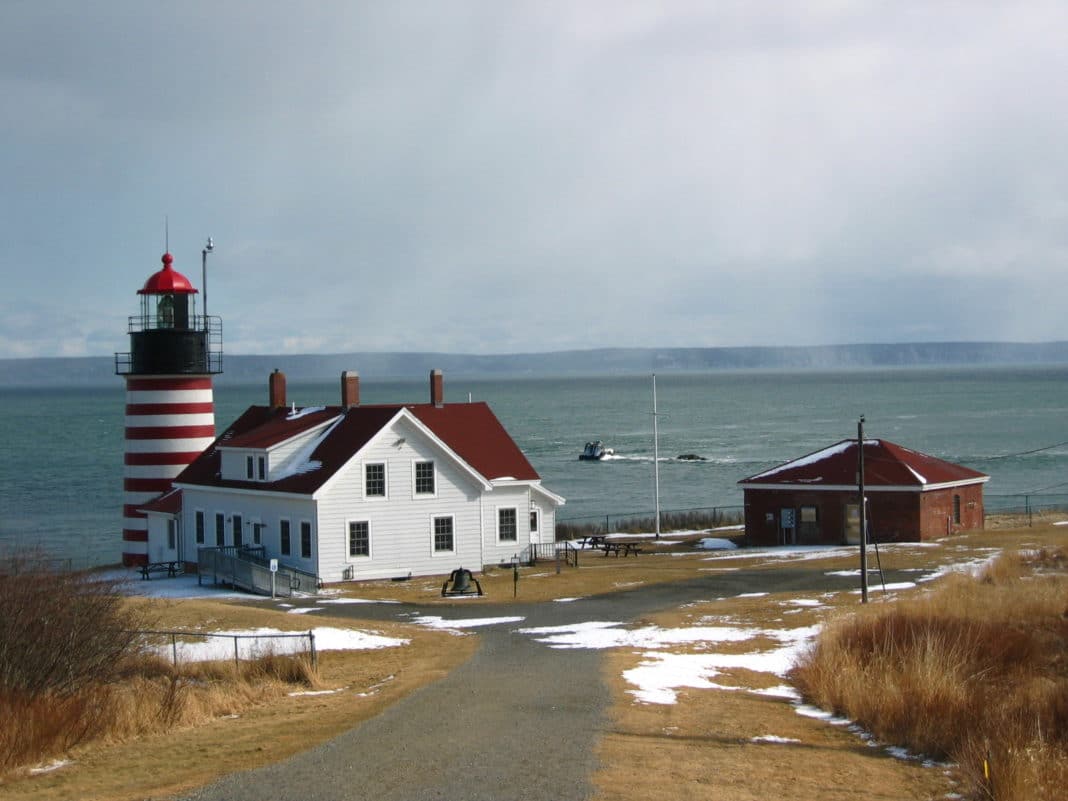 At the easternmost point of the state, you’ll find West Quoddy Head Light. Since 1808, they have been securing a safe passage to the shops by Quoddy Narrows. The first tower here was replaced in 1858 along with the famous 49 foot-high brick tower with distinctive red and white stripes. 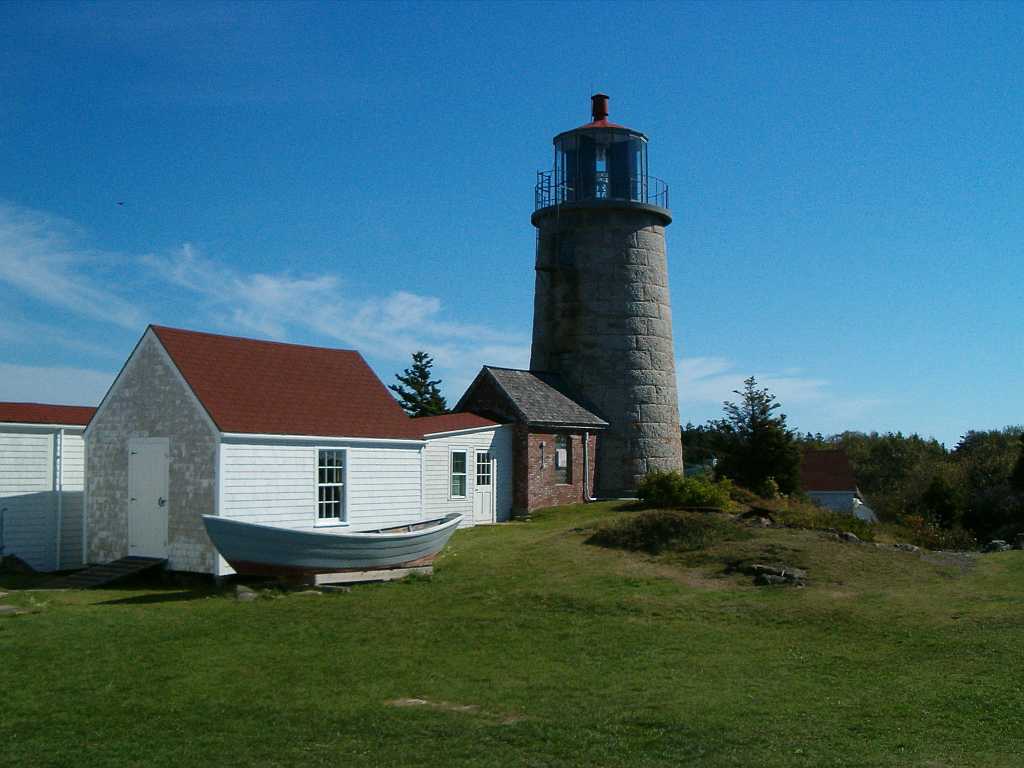 Built in 1824, this historic building is one of the most beautiful Maine lighthouses. You’ll find it located ten miles southwest of Point Clyde off the coast. You’ll never find more beautiful views than you would here. Perched 140 feet up on Lookout Hill, the Monhegan Island Light is certainly a sight to behold. Listed with the National Register of Historic Places, it is home to the Monhegan Museum, showcasing an exhibit of the island’s history. The lighthouse operates under the management of the U.S. Coast Guard. 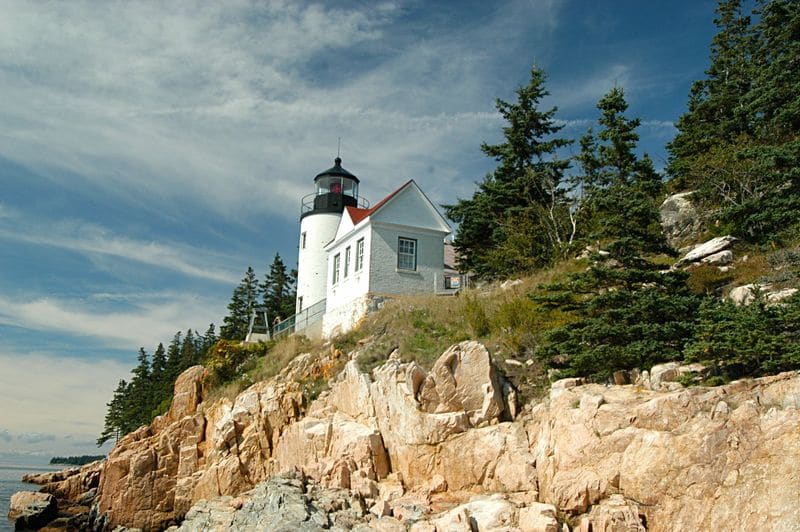 High on the cliff of a sentinel overlooking an endless blue, you’ll find the Bass Harbor Light. Of all the Maine Lighthouses, this has to be a favorite. Located in the village of Bass Harbor, it marks the entrance to the harbor over on the southwestern coast of Mount Desert Island. In 1898, a 4,000-pound-bell was added to the tower. As part of the National Register of Historic Place, tours can be arranged through the Tremont Historical Society. 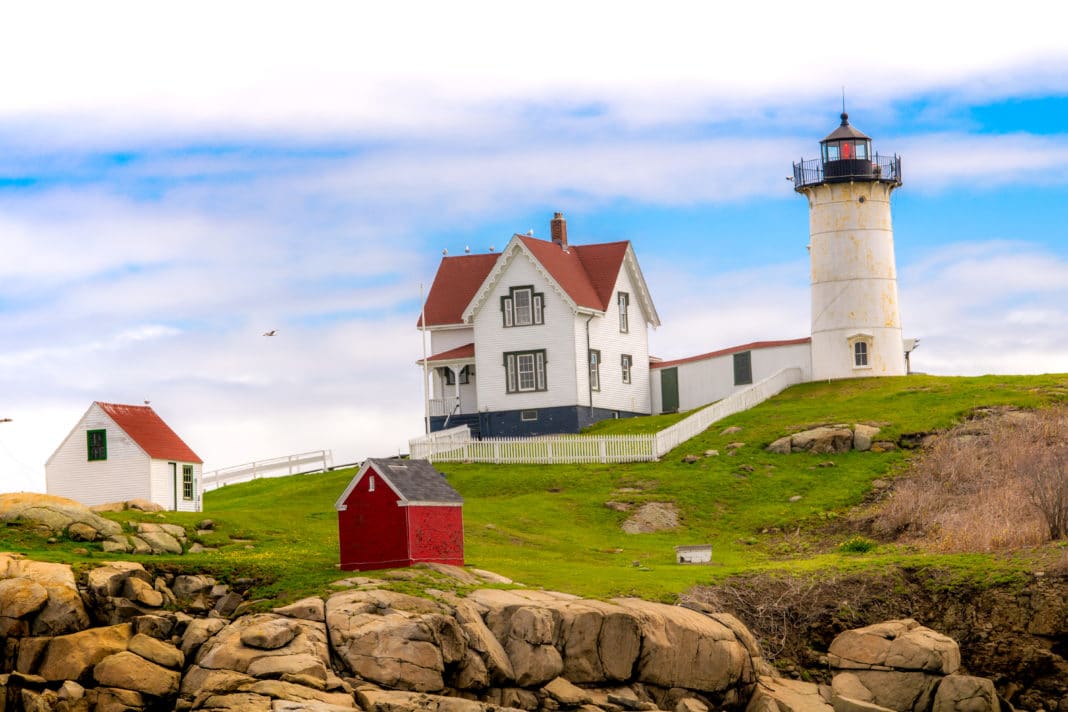 We’re sure you’ve seen photos of Cape Neddick Light before. But seeing it in person is a whole nother story. One of the most iconic Maine lighthouses, the photo is included in the list of earth’s most important structures that the Voyager spacecraft carries. Ever since 1879, it’s been standing on the shores of Nubble Island.

You’ll find it less than 100 yards from the scenic village of York Beach down at the ends of Long Sands. Standing 41 feet high, it towers above sea level, acting as a beacon in the night that can be seen up to 13 miles away. Just like all the lighthouses on the seacoast, the Cape Neddick Light is automated. Since the last lighthouse keeper moved out in the summer of 1989, it has been left unoccupied.

One of the most popular times to come view it is during the holiday season. On the first Saturday after Thanksgiving, Christmas lights go up, turning the chalk-white building into a festive landmark. You can come and see the lights until the first week of January. When you come to park, head over to Sohier at the end of Nubble Road in York Beach. While the lighthouse and its grounds are not open to the public, you’ll be able to park for free and get a great view of it during sunset. 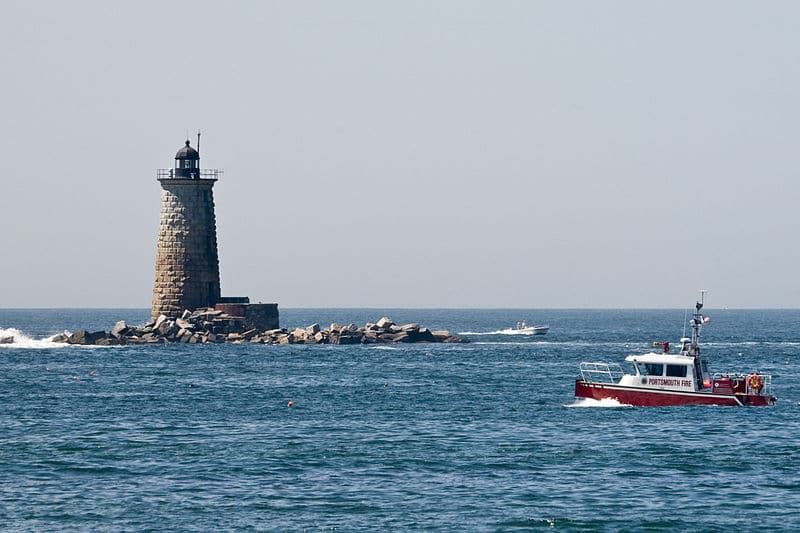 Marking the harbor of Portsmouth, the Whaleback Lighthouse is the first thing you see on the scene. Set on a granite rock nearly a quarter mile from shore, it guides ships of the night around the jagged edge of “Whaleback” on the northeastern side of the Piscataqua River. Historically, steering ships around the dangerous point of Kittery was an important task for the commerce of colonial New England. The harbor of Portsmouth played a critical role before the American Revolution. Afterwards, it served as the country’s first federal shipyard. As one of the most beautiful Maine lighthouses, this is definitely worth a stop to see. 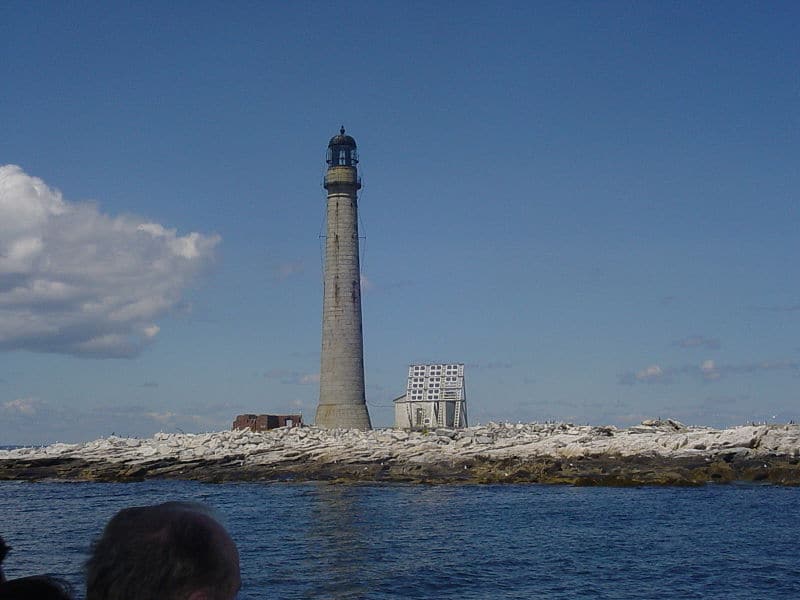 Six and a half miles off of Maine’s southern coast, you’ll find Boon Island Light. Its ledges were once the most perilous on the eastern seaboard until it was built in 1811. Many people link the name Boon island back to the famous shipwrecks of the vessel Increase in 1682 and the Nottingham Gallery in 1710. The story of the Gallery is a dark one, as the crew resorted to cannibalism. Moreover, the survivors credited their narrow escape to a “boon from God.” While the lighthouse is not open to the public, you can take a boat out on the harbor for a good view. There are plenty of local ferries in the area for tours. 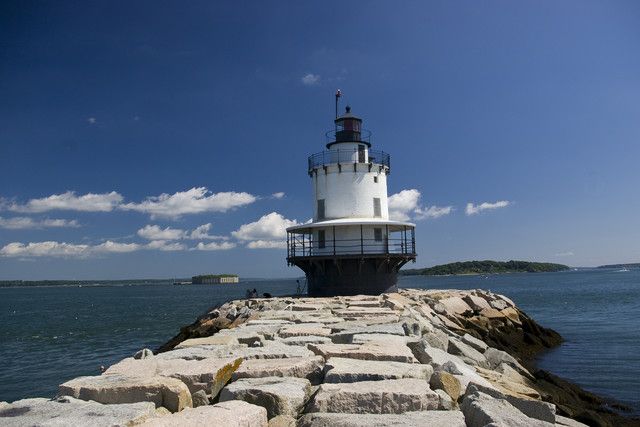 Jutting up on the harbor of Fort Preble, you will find one of our favorite Maine lighthouses to visit, Spring Point Ledge Light. This cassion-style lighthouse was built to warn mariners of the dangerous ledge on which it sits, jutting out into the break. As the only lighthouse accessible by land, it’s visited by thousands of travelers from all around the world every year.

Distinctive features set it apart from the rest. Brick upper works mark the sector box; it’s been a part of the history of Casco Bay for over a century. Today, it can be seen on local tv broadcasts regularly and became a symbol for the city of South Portland. 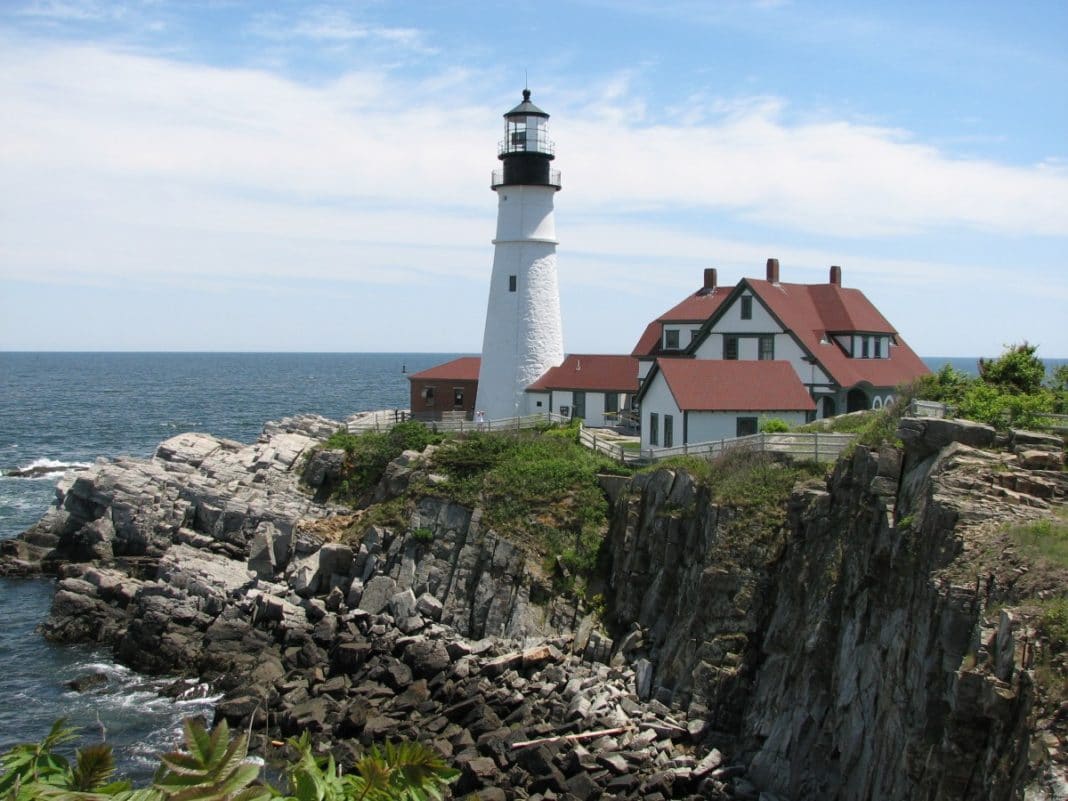 Did you know that John Quincy Adams commissioned the construction of the Pemaquid Point Lighthouse? Built in 1827, you’ll find this lighthouse located at the entrance of the Muscongus Bay and Johns Bay in Bristol. The town purchases the land in 1940 with the exception of the lighthouse tower. Today, it is managed by the Bristol Parks Commission.

To visit, you will need to pay a $3.00 admission fee. Included in the fee, you will receive access to the Fisherman’s Museum, Pemaquid Art Gallery, learning center, picnic areas, and more. Pemaquid is owned by the U.S. Coast Guard and entry to the lighthouse tower is included in your admission at no extra cost. Your admission ticket is good for one day. So if you’d like, feel free to leave the park for a while and return the same day using the ticket.

Book Your Trip to Visit the Most Beautiful Maine Lighthouses

We hope you enjoyed reading our list of the most beautiful lighthouses in Maine. As you can see, this beautiful state offers so much in the way of history and adventure for the curious traveler. Which lighthouse on our list would you like to visit? Let us know in the comment section below.

Related Article: London Streets That Will Give You Serious Wanderlust