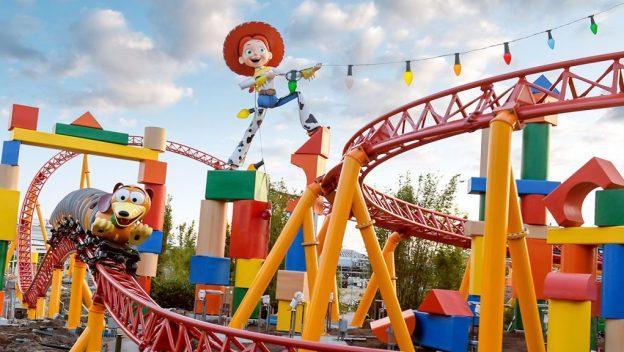 Disney World is adding another section to their Orlando park.

After months of eager anticipation, travelers can now get a glimpse of Disney World’s latest expansion. Disney Studios recently released photos of the newest park addition, offering guests a sneak peek into the world of Toy Story. The 11 acre expansion is sure to invoke that childhood nostalgia, especially for those 90’s babies.

From the looks of the pictures, Toy Story Land is an up close peek into Andy’s toy box. Wander through the massive Tinker Toy contraptions as you keep your eyes open for Woody or Buzz Lightyear.

The Slinky Dog Dash is a highlight of the park. Designed after the endearing slinky dachshund from the films, this roller coaster is fun for the whole family. The ride looks just like Andy fashioned it from his “Mega Coaster Play Kit.” Of course, no Toy Story ride is complete without a performance from Wheezy, the endearing squeaker penguin. Guests can enjoy Wheezy’s rendition the film’s iconic song “You’ve Got a Friend in Me.”

Another attraction guests can look forward to is the Alien Swirling Saucers. Spin around with the Pizza Planet aliens while dodging “The Claw” from above.

Keep an eye out for lifesize green army men throughout the park. They just might rope you into a game of “Sarge Says,” or talk you into joining their boot camp.

Take a break from all the fun and have a snack at Woody’s Lunch Box. This canteen serves delicious treats that are every kid’s dream meal. Enjoy the s’more French toast breakfast sandwich or a raspberry lunch box tart.

Toy Story Land opens on June 30 this year, just in time for the summer crowds. Be sure to stop by during your next visit to Disney World.