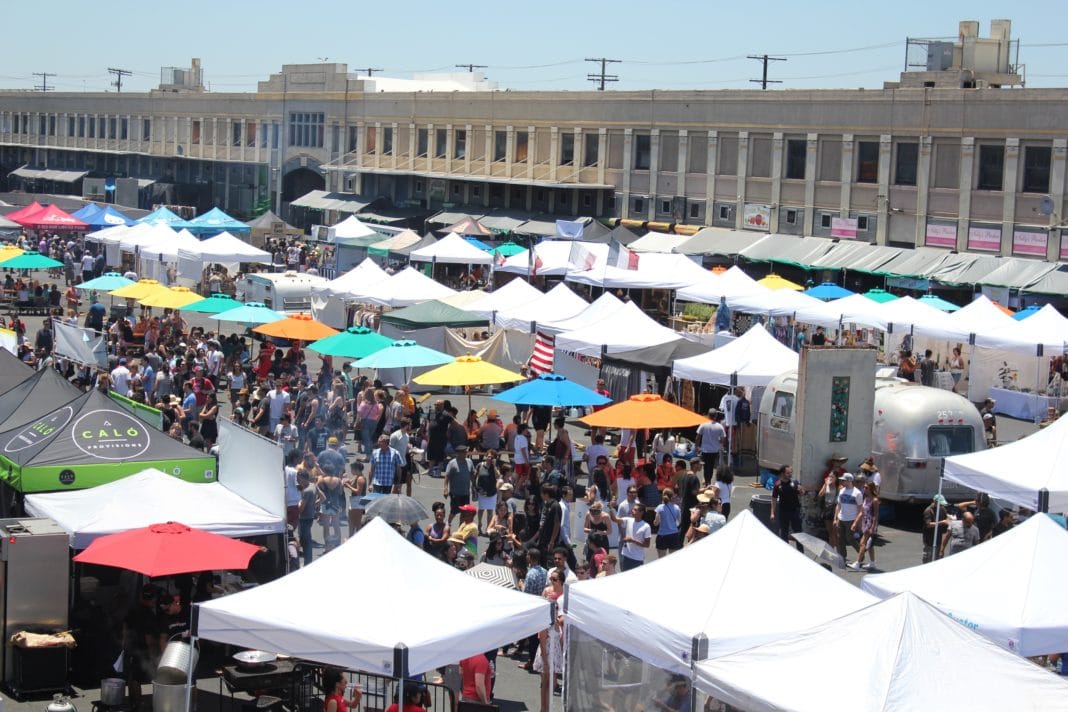 Being perfected over the past two years, Smorgasburg LA symbolizes the best food that this city has to offer.

Established in June of 2016, Smorgasburg, LA was born out of the success of others like it. Modeled after the Brooklyn, NY Smorgasburg, it is an outstanding version of an outdoor food market. It is open weekly on Sundays from 10 AM until 4 PM, serving up all kinds of fun and unique things. Not only is there a myriad of food vendor stands from the best and brightest upcoming chefs, but other vendors are around, too. The Smorgasburg LA Lifestyle section has huge amounts of locally made art, jewelry, accessories, home goods, and whatever else you can dream up. On top of all of this, there are frequently different events that add spice and spunk to these Sunday morning food fests. So, if you’re ready to dive into the best food and shopping in LA, look no further than these favorite vendors at the Smorgasburg LA.

Owners George and Sevana have searched the world in order to craft the perfect chimney cake. This was their way of bringing their travels and excursions back to Los Angeles. After studying in Slovenia at the Kurtos Academy in the small town of Murska Sobota, they had what they knew would take off at the Smorgasburg LA. So, you can grab their now famous eastern European chimney cakes and cones every Sunday or even hire them for a private event.

If you don’t have a sweet tooth, that’s alright. Not all of their cakes and cones are sweet like the name would imply. This year at Octoberfest, they’re introducing a delectable sausage curry chimney cake for a limited time. Of course, crowd favorite stuffed with ice cream, sprinkles, and Oreos are always popular. So, whether you’re craving sweet or savory, make sure to stop by Sweet N Hollow at the Smorgasburg LA for all your eastern European foodie needs.

Chef Jason Winters has been dreaming of, creating, and innovating food since he could toddle around his mom’s kitchen. Having worked under some of America’s best chefs, he eventually broke out on his own in 2012 and started Urban Pie. While this was quite successful, he soon realized there was more to tackle in the culinary world. Thus, in March of 2017, Hearth & Olive was born. One of the must-try dishes here is the Lamb Al Pastor taco. While a simple taco may seem not too daring for the Smorgasburg LA, chef Jason assures you it may be one of the best things he has created. Hearth & Olive is also a great choice for the vegans coming along. From the cauliflower falafel taco to tahini shakes, there are plenty of unique options for every foodie here.

When you get west of the Mississippi, great fried chicken gets harder and harder to find. Lucky for you, we’ve found it at Daddy’s Chicken Shack at the Smorgasburg LA. Seasoned and fried to perfection, it will give all the fried chicken even east of the Mississippi a run for its money. These sandwiches come tucked perfectly in a hand-sized brown baggie, but they are not to be underestimated. With options like the Spicy Daddy, you can’t go wrong. It comes with spicy sambal, tangy ginger mayo, and crunchy napa slaw on top of an oversized piece of fried chicken. You can always grab a Classic Daddy is you’re not a spice person.

Of course, some days, if you get to Smorgasburg LA early enough, you can grab some popcorn chicken and donut holes. Daddy’s Chicken Shack pairs up with Bakers Kneaded for maple mousseline cream-filled donuts holes to pop in next to their fried chicken bites. So, from sweet to savory to spicy, there is something for all chicken lovers at Daddy’s Chicken Shack.

Perhaps the most instagrammable option at Smorgasburg La is Shrimp Daddy’s signature garlic butter shrimp pineapple boat. Shrimp Daddy desires to bring you island flavors and hospitality, and that is just what you’ll get. Their shrimp is cooked shell and tail on to keep all its juiciness inside. Of course, you’re also encouraged to eat that same shell and tail of the shrimp as its all been generously drenched in their signature garlic butter sauce. Of course, if the pineapple boat is a little over the top for you, you can also get this delicious concoction on a plate too. You’ll also have chilled li-hing pineapple, rice, and Hawaiian mac salad on your dish as well, so make sure to come hungry. But, you should know that if you do make it to Smorgasburg LA, Shrimp Daddy is an essential foodie spot here.

Amazebowls sprouted from a passion to bring fruit and healthy eating to the streets of LA. Their acai bowl base is dairy free, so all can eat it guilt-free. There is no refined sugar or shortcuts taken when hand-making these bowls when you order. You’ll get to watch the freshest, local produce make its way into your bowl alongside the house-made granola. No concentrates or funny business is welcome here, just down to earth good food that’s good for you.

Some favorite Amazebowls include the Dragon Bowl-Z and the classic Amazebowl. The first comes with a Pitaya blend, topped with hemp granola, bananas, strawberries, and mangoes. The latter is a blend of Açaí, topped with vanilla almond granola, bananas, blueberries, and strawberries. Of course, if you want the picture perfect Amazebowl, grab the OG Coconut Bowl. Coming in its own half coconut shell, you’ll be blown away by the vanilla almond granola, bananas, blueberries, strawberries, coconut shavings, and fruit crisps. Whichever one of these you grab, or if you make up your own, we can assure you that you’ll leave Amazebowls and the Smorgasburg LA feeling better than when you came. That’s just how good these bowls are.

Just like the name implies, you’ll want these donuts around you all the time, just like a good friend. Donut Friend has perfected their dairy and egg-free donut to create one of the most beloved donuts in LA. Their most loved donut is the Strawberrylab. It’s filled with fresh strawberries and whipped cream while being topped with a chocolate glaze. If you’re feeling adventurous while perusing Smorgasburg LA, consider the Jets to Brazil Donut. The raised donut is stuffed with vegan cream cheese, strawberry jam, and fresh basil, then topped with a vanilla glaze and balsamic reduction. But, there’s an array of other donuts as well. From chocolates to cookie butter, lime and even siracha-inspired choices, you can easily enjoy quite a few unique flavors at Donut Friend. So, stop by next time you’re at Smorgasburg LA to see what treats they’re baking up for you.

You can’t go wrong putting a mesquite grill and whole, live main lobsters together. That’s just what happens at the Lobsterdamus booth every Sunday at Smorgasburg LA. The 1 ¼ pound wild-caught Maine lobster is first softly blanched before being drizzled in butter and spectacularly seasoned before hitting the grill. You can get this stellar lobster on nachos, truffle fries, or in the form of a lobster ball. Their classic is the Lobster Nest, which is the whole lobster over garlic noodles. Yes, this is truly a lobster lovers heaven. There are also rotating seasonal specials to always keep you on your toes when visiting Lobsterdamus. So, if you are an east coaster missing the spectacular seafood, or simply want to eat the best lobster on this coast, make Lobsterdamus a must-eat on your list of vendors to stop by at Smorgasburg LA this year.

Who knew that mozzarella sticks could transport you to another world? Well, that’s what the culinary experience does for you when you grab a bite at Big Mozz at the Smorgasburg LA. Having been started in New York by Matt Gallira, chef Jimmy Warren has also joined the team. Together, they have taken over the mozzarella stick world. From the perfectly chosen mozzarella inside to the undeniably delectable and crisp seasoning on the outside, these will melt in your mouth in the best possible way. Each order will produce four of these sticks made to perfection, as well as their signature tomato dipping sauce. We’re assured that you’ll never fall for another mozzarella stick after experiencing the ones at Big Mozz. So, make sure to save room for this place while you peruse all the booths at Smorgasburg La.

These are more than a few of the out of this world food vendors that have made it to Smorgasburg LA.

With an ever-rotating array of vendors and booths, you’re never quite sure what marvels you might come upon while strolling Smorgasburg LA. It’s a great place to fuel up before hitting one of the best beaches in LA, or make this your lunch stop when exploring downtown Los Angeles. From sweet treats and coffees to unique twists on international food, it’s all here. Make sure to show up early and hungry to get the full effect of everything that this outdoor food market has to offer.