Have you ever gotten lost on the web looking at dreamy castles in France?

If you’ve had Mont Saint-Michel as your laptop screensaver, this article is for you. Travel might seem like a far off dream for you. But it doesn’t have to be. Over the years, it has become much more affordable than you might think. So for those of you who daydream about visiting the most beautiful castles in France, we’ve compiled a little list to get you started.

For those who know France’s history, paying a visit takes on new form. This beautiful country has such a rich cultural heritage and a downright fascinating past. Scattered across the landscape, castles and stone forts stand as strong reminders of Europe’s many wars. Check out our guide of the most beautiful architectural marvels you need to see during your lifetime. P.S. We’re not playing favorites. This list is in no particular order.

Here Are Our Picks for the Most Beautiful Castles in France 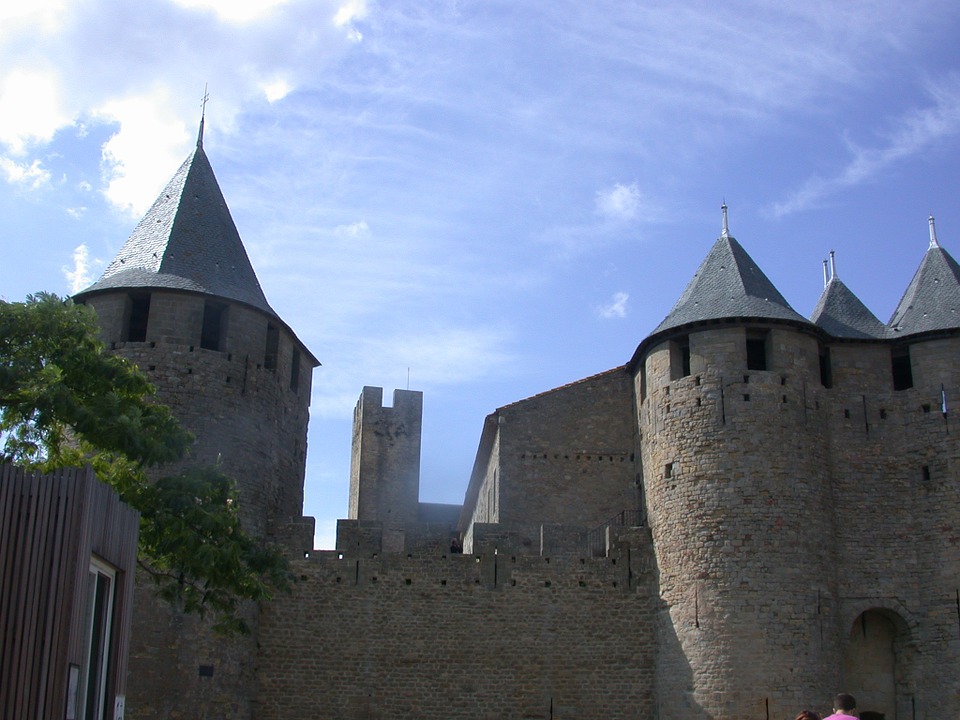 Okay, if you want to get technical, Carcassonne is more than a walled castle. It’s actually a fortified town – and one of the most impressive ones from the 11th century at that. The irony is that during the 19th century, it was so dilapidated that it was actually scheduled to be torn down. It’s thanks to the local mayor at the time that we can still visit it today.

The famous architect Eugene Viollet-le-Duc was the one to take on the project and the rest is history. Why was this castle/town so important? First, it is located on one of France’s oldest and most important historical routes. The area was first fortified by the Romans and given the name Carasco. After they were driven out by invading tribes, the town become more fortified and developed.

Moving on into the 13th century, Carcassonne was attacked during the Albigensian Crusade by Simon de Montfort and seized. Even more fortifications were added – enough to stave off the Black Prince of Carcassonne during the famous Hundred Years War. Due to its location on the border between France and Spain, it gained critical value. From the 17th century onward, Carcassonne was recognized as having strategic importance during wartime.

Today, it consists of a low wall of defense, a higher wall framed with towers, and an enclosed ancient town. Here, you’ll find well-preserved old buildings, narrow streets running through the areas of medieval dwelling places, and a museum giving a detailed account of the Albigensian Crusade. This is one of the best castles in France to visit. 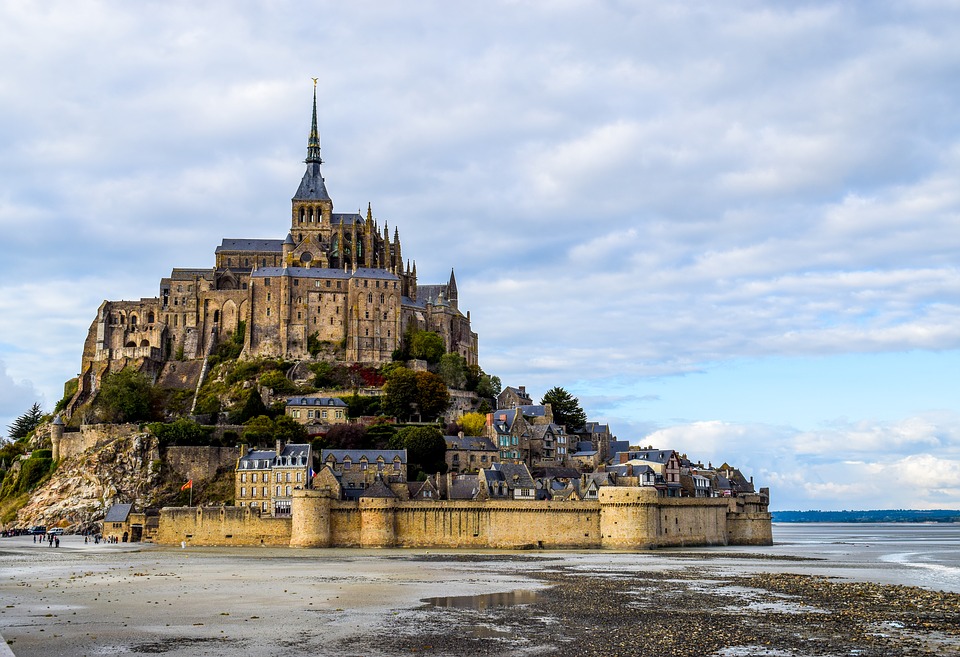 This beautiful island is well known for gorgeous medieval monastery. Surrounded by the mesmerizing waters where Brittany and Normandy unite, this island draws you in from afar off. For millennia, Mont Saint-Michel has served as a place of jaw-dropping inspiration. From the aesthetic to its history, there’s no denying the world’s fascination with this mount turned place of Christian pilgrimage. Where did this story begin?

It was during the 8th century that the bishop Aubert arrived, claiming the Archangel Michael compelled him to build a church on the hilltop above the sea. From the year 966 on, the dukes of Normandy and French kings worked to support the creation of a benedictine monastery on Mont Saint-Michel. Throughout medieval times, its construction flourished. More monastic structures were added, most notably The Marvel.

Another prominent addition was the Abbey, which soon became a renowned place of learning. Perhaps the most inspiring part of its history was that even in times of conflict, pilgrims crossed the war-struck channels. Thankfully, the ramparts at Mont Saint-Michel’s base were enough to keep out the English.

Today, smaller buildings have been converted into museums, hotels, restaurants, and boutiques. Of all the castles in France, this is one you can’t pass up. There is nothing quite like the history and beauty of this stunning architectural feat. 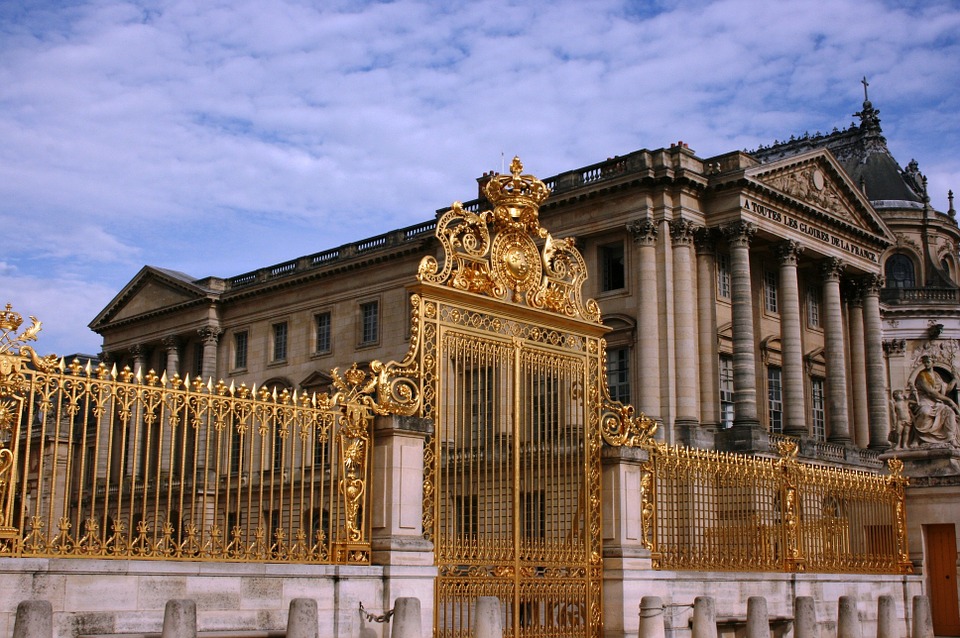 You can’t visit France without seeing the home of the Sun King. The Palace of Versailles is world-renowned for being on the most critical places in history. After all, this is was the seat of power for the French monarchy for centuries. First, it was a hunting lodge, then a palace, and from the 19th century onward, a museum. Every aspect was designed to laud King Louis XIV. At the very heart of the palace, the Hall of Mirrors marks the site where both the Franco-Prussian War (1870-71) and the World War I (1914-18) concluded.

In 1837, it had become the Museum of the History of France under the order of King Louis Philippe. The 2,300 rooms of the Palace were dedicated to housing new additions of sculpture and paintings depicting not only great figures but significant events in French history. These collections continued to grow until the 20th century when the Palace rediscovered its historical role.

If you are interested in taking a tour of the Palace of Versailles, we highly recommend you do so in advance. You can reserve tickets online through their website. Based upon what you would like to see, there are several options for your palace ticket, palace passport, and guided tours. Check off one of the most famous castles in France from your bucket list. 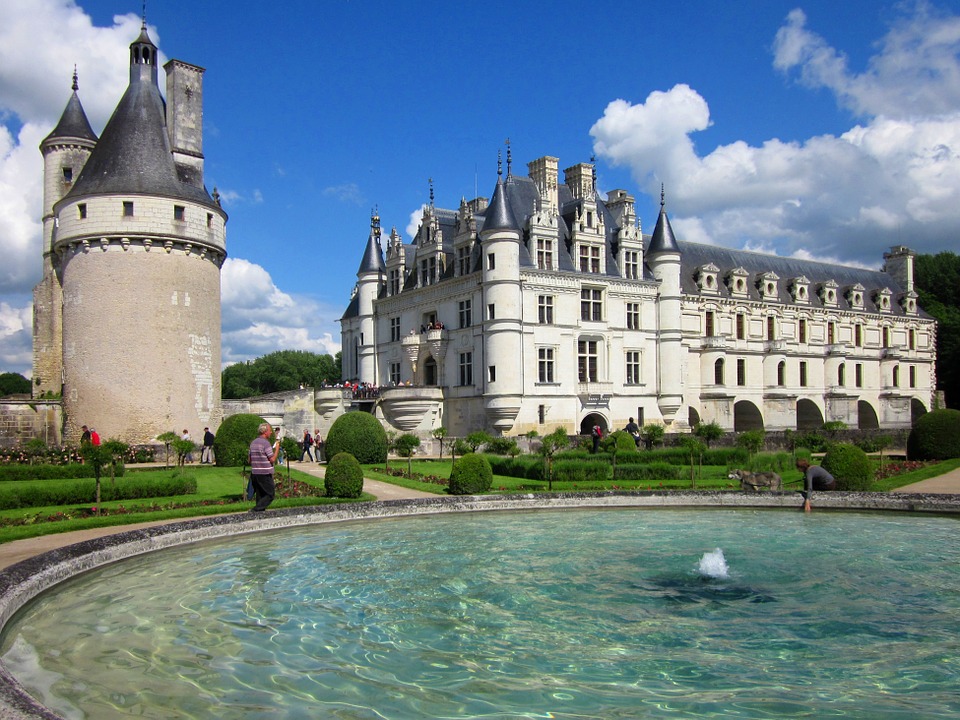 Have you seen anything more stunning than this architectural masterpiece? There’s no doubt in our minds that Château de Chenonceau is one of the most enchanting castles in France. It was given as a gift from King Henry II to his mistress Diane de Poitiers. But shortly after Henry passed away, his wife Catherine de Medici kicked her out and took possession of the castle for herself.

Perhaps one of the most fascinating facts about this castle is it has been ruled by women. It didn’t take long before Catherine made additions to the structure. In fact, the famous two-story gallery, Batiment-des-Domes over Diane’s Bridge created the unique structure we see today. She also created a famous garden and hosted epic balls in which the most prominent members of European royal families attended.

Fast forward to the 20th century. During the First World War, the castle served as a hospital. In World War II, it was partitioned. One part was under Nazi control while the other half was retained by France. Following the war, the castle and its gardens were once more restored to the public for viewing.

Today, you can tour the castle. You’ll see that it’s finished with old furniture as well as beautiful tapestries from the 16th and 17th centuries. Gracing the halls are remarkable works from Rubens, Le Tintoret, Riguard, and more. Of all the rooms, the bedrooms are the most lavishly decorated. Second only to the Château de Versailles, the Château de Chenonceau is the most visited castle in the country. 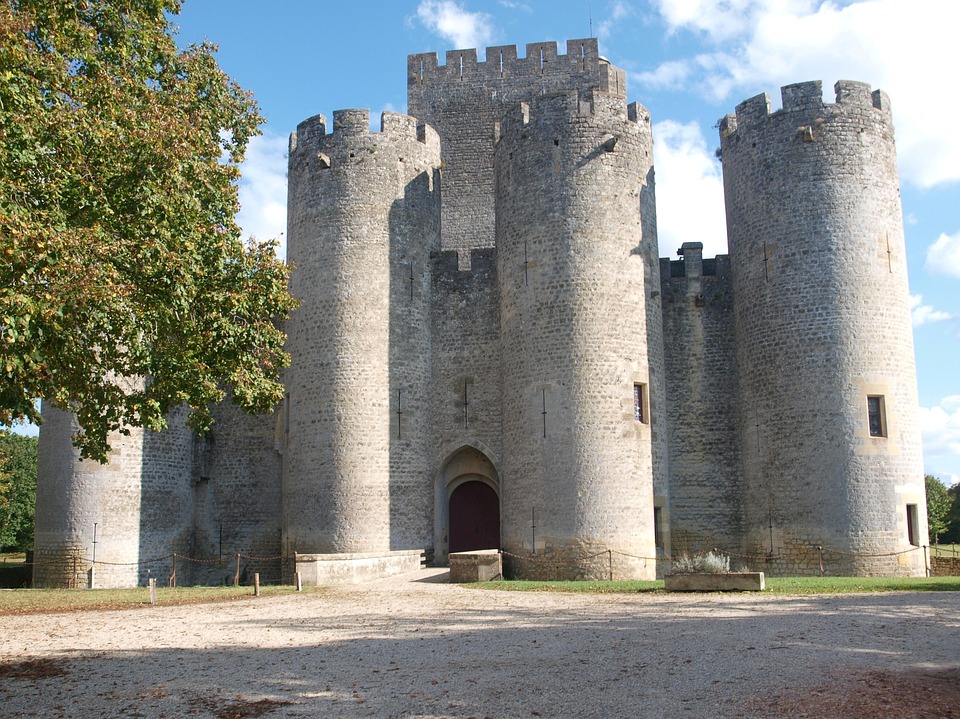 As the most popular castle in the Bordeaux region, this castle holds a great deal of rich history. Charlemagne the Great was the first to lay the foundations more than 1,200 years ago. It wasn’t until the 19th century that the castle underwent dramatic renovations under the leadership of the gothic enthusiast Eugène Viollet-le-Duc. Perhaps even more interesting is that the castle was home to the same family for more than 700 years. It’s easy to see why they had no desire to move elsewhere. 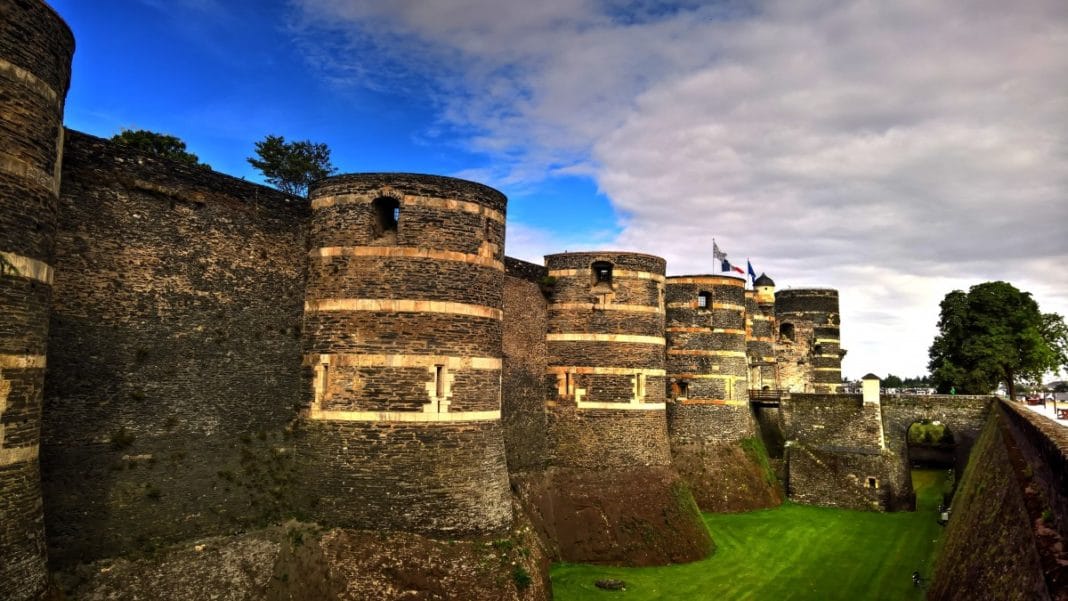 The Château D’angers is a remarkable citadel. Marked by 17 towers, this massive stone fortification stretches for almost five hundred meters. It houses the Tapestry of the Apocalypse, a major piece in the world of medieval art. This breathtaking set of tapestries was produced back in the 1300s.

It depicts the Apocalypse as described in the Biblical Book of Revelation. Art historians consider it to be among some of the most critical collections of French art from the pre-Renaissance age. During the 14th and 15th centuries, the Dukes of Anjou held their court in Angers. As enlightened patrons and princes of the arts, the chateau is indicative of their refined lifestyle.  If you would like to tour the castle, free admission is offered for children under the age of 18. 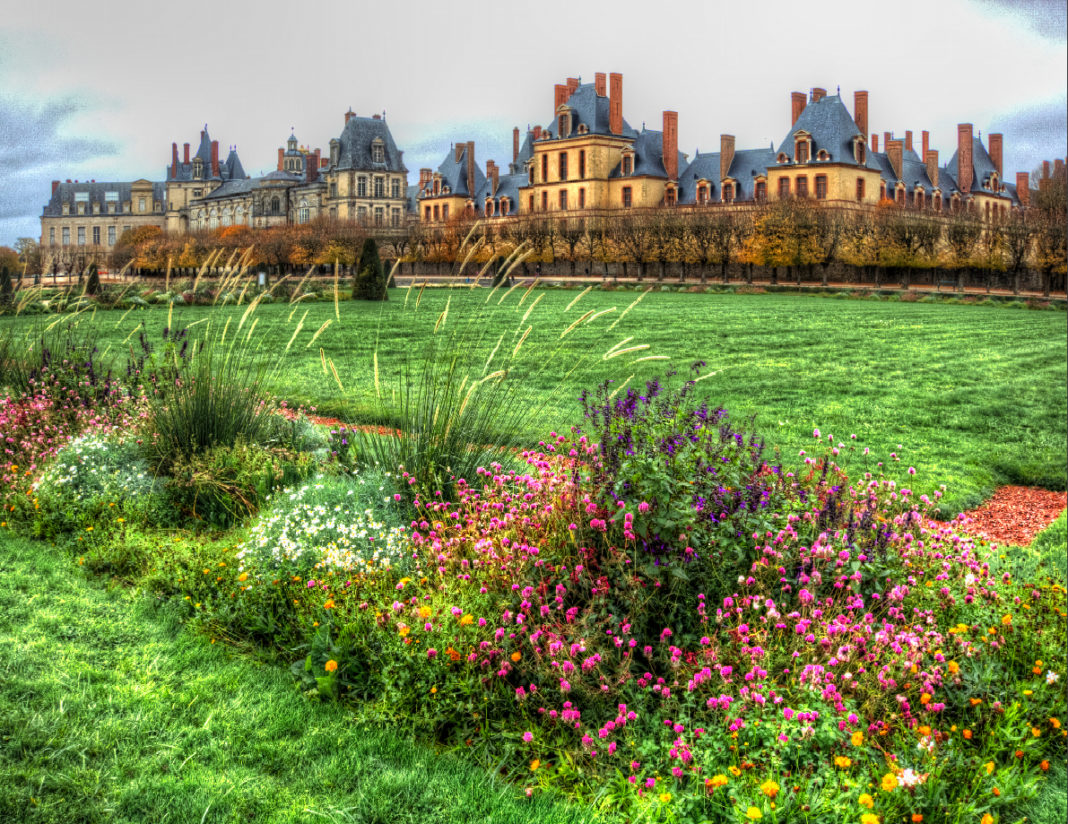 This UNESCO World Heritage Site was the dwelling place of French kings all the way from the 12th century until the demise of the monarchy. The end to this type of reign came shortly after Napoleon III’s abdication at the end of the 19th century. You’ll find the Palace of Fontainebleau located in the heart of a dense forest south east from Paris (make sure you also check out the top day trips to take from Paris). This stunning feat of architecture contains more than 1,500 rooms. Needless to say, paying a visit will give you an unparalleled insight into French history spanning over 700 years. 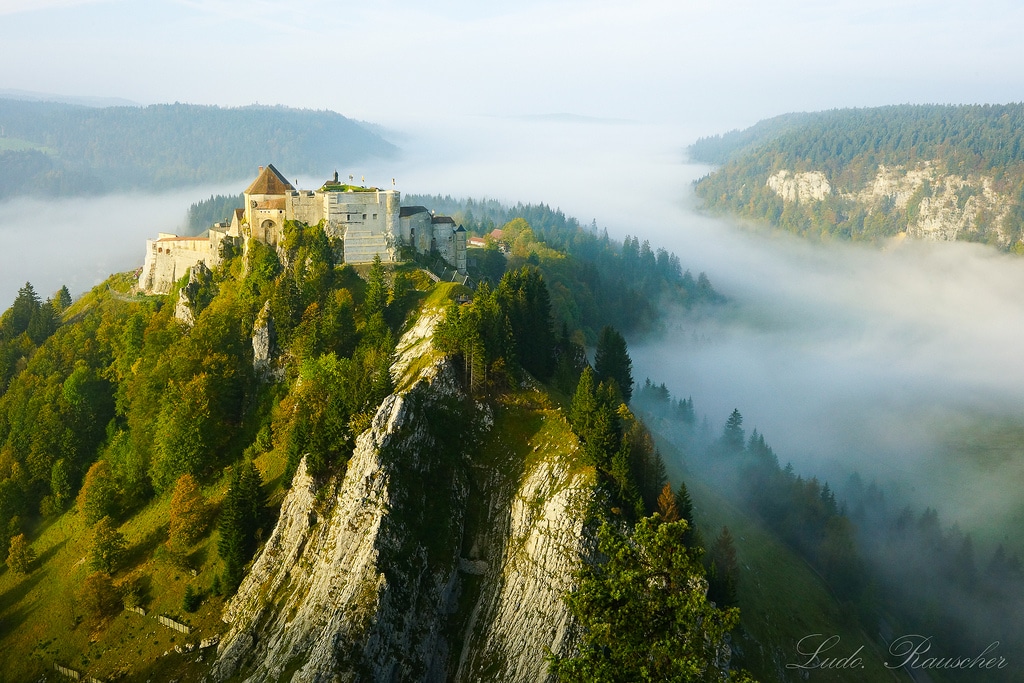 Did you know that this castle was initially constructed out of wood in the 11th century? In 1454, it was expanded to become a border fort. Later on during the 17th to 19th centuries, it served as a prison – most notably for holding Toussaint Louverture, the leader of the Haitian Revolution (the only successful slave revolt in history). Today, Château de Joux is home to a weaponry museum, showcasing unique elements of war.

Over the course of its history, a lot has gone down around these walls. In fact, the castle was a site of several major European conflicts. Just a few of the examples include the passing of Charles the Bold back in 1476, its occupation during the tribulation of the Thirty Years’ War in 1639 and surrender in 1674 with the French conquest of Franche-Comte by King Louis XIV.

This is definitely one of the castles in France you must see. A scene of legends, its historical significance cannot be overemphasized. Take advantage of this historical lesson as well as the natural setting of Pontarlier during your visit. Here, the guided tours are fascinating enough to satisfy even the pickiest types of travelers.

Book Your Flight and Visit the Most Amazing Castles in France

Go ahead and book your flight. Embark on a beautiful road trip. The country of France and its people have so much culture to offer. From stunning royal estates to strong fortresses, l’Hexagone is just waiting to be explored. Whatever kind of vacation you want, France has it all – go explore. Climb the stairs of medieval fortresses, tour dark and mysterious dungeons within castles in France. Perhaps you should book a stay at one of the beautiful castle hotels too. It’s all at your fingertips.

Related Article: Take Your Pick: Here Are the 10 Best Castles in Ireland