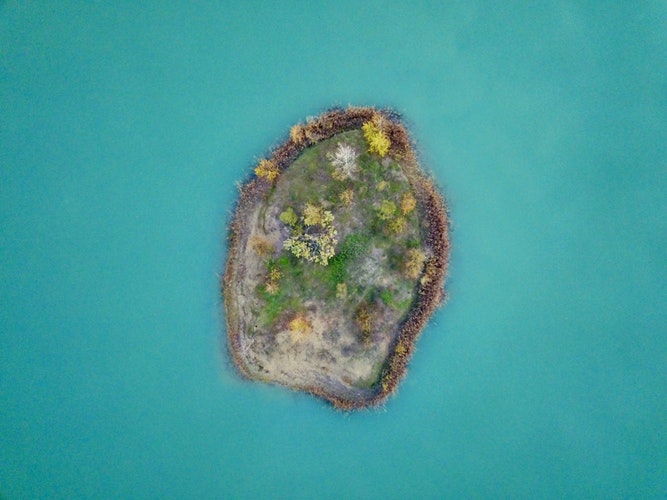 Quitting everything and moving to one of these uninhabited islands right now doesn’t sound half bad, does it?

Well, you might want to think twice before making such a commitment. While it could go so well for you and you make millions by finding the perfect island, that most likely won’t happen. Most uninhabited islands have been left vacant for a reason. Whether it is due to environmental protection, religious reasons, intense weather, or something else, it is probably best to leave inhabiting islands to someone else. But, many of these uninhabited islands are quite unique, and a few of them you are able to explore. So, get your adventure boots on because you have quite the journey ahead of you. For quite some time, three fishing families lived peacefully on Okunoshima Island off the coast of Japan. But, when rumors of chemical weapons being developed in other countries spread, Japan wanted to start their own program. So, construction began on Okunoshima Island in 1927 for a poisonous gas research and production facility. Trying to keep it top secret, Japan erased this island from as many maps as possible while they produced six kilotons of mustard and tear gas.

There had been rabbits used in the testing of these chemicals, as well as many rabbits let loose on the island when it became a park during World War II. So, as the gas factory has long been shut down, the rabbits have been the sole residents of Okunoshima Island. In 1988, the Ōkunoshima Poison Gas Museum was opened and helped spur tourism to the island. The rabbits are incredibly friendly and will come right up to you, and for this reasons, dogs and cats are not welcome here. In addition to visiting the gas museum, you can walk around and look at the old gas factory. However, entrance is prohibited and quite dangerous. All in all, this may be one of the most unique and strange of the uninhabited islands on our list.

The next of our uninhabited islands is the largest one on earth. Nestled in the Baffin Bay in Canada, Devon Island is uninhabited because of the intense elevation and temperatures. Over twenty thousand square miles of mountains and arctic tundra are here. This includes the Haughton Impact crater which is fourteen miles across. This crater was created by a meteorite crashing down. This is one of the best spots on earth for testing land rovers for space expeditions. So, organizations like the Canadian Space Agency and NASA’s Haughton Mars Project have based themselves here for years. They use the crater to both test and train their technology and operators for space expeditions.

If this is sounding fun to visit, maybe the temperatures will remind you why this is one of the uninhabited islands. It gets down to -60 degrees Fahrenheit in the winter, and might hit 50 degrees on during the few weeks of the growing season. However, only a few muskox and birds can survive this. So, while Devon Island does sound tempting to visit, we would recommend leaving it to the space explorers and scientists. Jaco Island is off the coast of East Timor and located within Nino Konis Santana National Park. This is one of the uninhabited islands on our list that remains so because of religious reasons. It is where the Banda Sea to the north meets the Timor Sea in the south. This mixing of waters is sacred, in turn making Jaco Island a sacred spot. While you cannot stay here, you are allowed to hop over to the island for a day. It’s luscious greenery and glorious beaches will be well worth it. Locals can give you a ride over for about ten US dollars. We recommend enjoying the day on Tutuala Beach. You’ll quickly fall in love with the silence and solitude found on this sacred and uninhabited island. These islands attract many backpackers as well as wildlife connoisseurs. The wide array of animals include the dusky leaf monkey, leopard cat, fishing cat, long-tailed macaque, wild boar, and smooth-coated otter. Collared Kingfisher, white-bellied sea eagle, black baza, brahminy kite, oriental pied hornbill, Eurasian woodcock, pacific reef heron, and common hill myna are just a few of the birds that you can find. This uninhabited island got more popular after the book and movie “The Beach” by Alex Garland and starring Leonardo Dicaprio came out. Between the trails, lakes, beaches, and reefs, these uninhabited islands are a stunning attraction if you’re in Thailand. So, put them on your list of things to do while in southeast Asia.

Shipwrecks, guano mining, and death all spot the history of Clipperton Island. This is now one of our uninhabited islands, although it wasn’t always that way. Located southwest of Mexico, this coral atoll is currently a French minor territory. There is not much left on this barren island aside from a few coconut palms. On the upside, the lagoon in the middle of this island does have potable water, according to the crew of the M/V Monarch which sank off the coast in 1962. They survived 23 days on the island without getting ill. Through the hundreds of years leading up to this, various countries laid claim. From the French, Spanish, Mexican, and even American occupation, one can never quite be sure who thought they owned this island, and at what time.

In 1906, a popular fertilizer was guano. So, the first mining settlement began then with one hundred villagers. Resupplies occurred every two months by ship. However, when the Mexican Revolution happened, the resupplies stopped coming. This led to the death of everyone but sixteen people by 1917. The one male alive declared himself king and terrorized the Islanders, who then killed him. The US Yorktown picked up the remaining survivors in July of 1917. This was the last formal colony on the island. Today, fisherman, navy patrols, and the occasional scientific or amateur radio expedition are the only ones to stop by Clipperton Island. But, it is overall one of the uninhabited islands with the darkest history.

Somewhere in New York City without any people? It sounds impossible, but North Brother Island is truly a fascinating uninhabited island. It sits in the East River between the Bronx and Rikers Island. The eerie remains of the Riverside Hospital overlook the banks. Riverside Hospital was founded in the 1850s for smallpox patients and at one point had an additional Tuberculosis pavilion. The infamous Typhoid Mary was housed here until her passing in 1938, and the hospital closed soon after.

Over the following years, the island housed veterans who were attending college then had a treatment center for adolescent drug abusers. While various other uses have been proposed over the years, it has settled on being a bird sanctuary. It is off-limits to the public, so you cannot legally go walking the old ruins. That being said, there are a few current movements to allow some sort of limited public access to explore the island. So, if you want to check it out, perhaps writing your NYC council member can do the trick. Perhaps the most majestic looking of all the uninhabited islands on our list is Ball’s Pyramid off the coast of Australia. It is an eroded volcano that juts out of the ocean 1,844 feet high while being only 3,600 feet across. It looks like many of the outstanding rock formations around the globe. The Lord Howe Island Marine Park technically has this island within its borders since its discovery in 1788. While you cannot go ashore anymore, it has been summited. In February of 1965, four men from the Sydney Rock Climbing Club successfully made it to the peak. Climbing has been banned since 1982 but with correct permitting applications and approval process you can climb it.

This uninhabited island is also home to the Lord Howe Island stick insect. While there were twenty-four on the island in 2001, scientists have been nourishing the population to bring them back from what they thought was extinction. But, all in all, Ball’s Pyramid is a stunning island that houses a world of wonders.

These are just a few of the uninhabited islands around the world. There are so many more with unique stories and lore surrounding them.

Have you ever been to an uninhabited island? They can range from being tranquil day trips to eerie spots to explore. Whether they’re full of abandoned buildings, rare insect and bird species, or incredibly cold, they each do have a unique contribution to our world. But, when it all comes down to it, we hope you’ve enjoyed these uninhabited islands.

Related Article: A Guide to Having the Best Vacation in the Thousand Islands